The Halo E3 2000 Trailer was an in-engine cinematic trailer for Halo: Combat Evolved, shown at E3 2000. The events depicted in the trailer do not appear in the final game. Bungie also made a comedic advertisement "demonstrating" the Nvidia GeForce 2 GTS graphics card using the E3 engine to make the commercial.[1]

A pair of Elites are depicted on patrol, watching a pair of Banshees fly away, when they suddenly get sniped by John-117, who has a different and more robotic voice than the final game. He then claims that a landing zone is clear, and a Pelican dropship flies in, putting down Marines (a squad comprised of Sergeant Stacker, Private Wang, and several unranked Marines: Geoff, Segur, McLees, and Laine), and a Warthog. They split into two teams, headed for the same destination. As they travel across Halo, they encounter native wildlife not included in the final game, namely a pack of Blind Wolves and a group of Thorn Beasts.

The group with the Warthog (McLees, Segur, and Geoff), get to the target first, spotting six Elites, four Ghosts, a Wraith, and what looks like a Spectre. Segur and Geoff attract their attention, drawing the Wraith into range of McLees' Warthog cannon, but Segur is killed by Needler rounds to the head and back. Stacker's group appears, flanking the Elites and killing all of them. They go in the Forerunner structure while Geoff and McLees guard the door. The three marines proceed into an underground chamber where they are soon ambushed and massacred by more Elites, the only Covenant alien featured in the trailer. One Elite in particular is depicted wielding an energy sword in one hand and a large Energy Shield on his other arm. It is possible that it was shrunken and transferred over to the Jackals in the final game. Wang is killed by the Elite with the sword, and Laine is killed on the ramp back to the door. Stacker is killed urging the remaining marines to fall back. McLees covers the door while Geoff takes a Ghost and flies off. McLees fails to kill the Major Elite running to a Ghost to pursue Geoff, and is shot by three Minor Elites. A wounded McLees detonates a grenade to take out the Minors before they can fly off in the Spectre vehicle, destroying all the vehicles there.

The Major Elite and two Banshees pursue Geoff and destroy his Ghost. Geoff is wounded, out of ammo, and about to be killed, when John-117 appears with an Energy Sword. John then impales the Elite with the Energy Sword. Geoff is evacuated while John-117 tells him that his fight is just beginning.

The camera pans over a mountainous landscape. At the top of a mountain, near an apparent Forerunner complex, two Elite Minors are patrolling back and forth. Two Banshees fly overhead.

The first Minor Elite walks over to the second.

Minor Elite 1: (translated) They will surely find them.

The Pelican dropship accelerates over a body of water toward the mountains.

Lieutenant (COM): Hang tight, this may get a little rough.

The Pelican flies low between the mountains.

Sergeant Stacker: I want a quick, tight dispersal. If they catch us napping, this operation is as good as over!

Lieutenant (COM): Coming up on the insertion point.

Sergeant Stacker: Geoff, you get that 'Hog rolling as soon as we dust off. I need your team in position A.S.A.P.

The Pelican lowers straight down and hovers several feet above the ground. The Warthog is detached from back of the dropship and the marines jump out of the aircraft's bay.

McLees, Segur and Geoff climb into the Warthog.

Sergeant Stacker: Get the hell out of here, Lieutenant.

The Pelican takes off and flies over the Warthog.

Geoff (COM): See you at the rendezvous point.

Stacker, Wang and Laine run along a mountain path toward their objective. The Warthog drives along the coast to the same location, pausing to avoid a herd/pack of Blind Wolves. The Warthog arrives at the Forerunner facility first. Geoff dismounts and approaches the facility on foot.

Stacker's group run past a herd of Thorn Beasts, one of which roars.

Sergeant Stacker: Draw off what you can.

Geoff waves for Segur and McLees to come toward him. They leave the Warthog and run toward him.

McLees returns to the Warthog and mans its turret. Geoff and Segur crest a rise and open fire on the Elites guarding the facility's entrance.

The Elites return fire and a Wraith slowly makes its way toward the marines.

Geoff: That did it. Fall back!

As they turn to retreat, Segur is shot in the back repeatedly and killed. Geoff continues to distract the Wraith as it crests the rise and is destroyed by McLees using the Warthog's cannon turret. Stacker's group arrives and wipes out the rest of the Elites.

Sergeant Stacker: Geoff, you and McLees keep this entrance clear. The rest of us are going down that hole to find whatever those blue bastards were after. Private Wang, you have point.

Sergeant Stacker: Hold up. And Wang? Put a sock in it, will ya?

Private Wang: All's I'm saying is, there's a lot of unlocked doors for somethin' that nobody's supposed to have been in in 100,000 years.

Sergeant Stacker: We got nothin' down the rabbit hole. See anything topside?

Geoff: Not a damn thing.

An Elite Major sneaks up behind Wang and spears him on the end of an Energy Sword, cutting off his sentence and lifting him off his feet.

Stacker and Laine open fire, but their shots are blocked by the Elite's arm shield. Numerous Elites push forward and pursue the humans.

Laine is killed and falls off the ramp. Stacker shoots and kills one of the Elites.

Sergeant Stacker: Geoff, get the hell out of here! That's an or--

Stacker is killed by heavy fire.

Geoff gets in a Ghost and flees the facility. The Elite Major follows on another Ghost, and although McLees shoots at it, he is unable to stop it. He is then shot repeatedly by three Elite Minors.

He holds out a fragmentation grenade. The Elite Minors turn toward him and growl with alarm. The grenade explodes, killing McLees and the Elites, and triggering a series of explosions which destroy two Ghosts and a Spectre. Two Banshees chase down Geoff, destroying his Ghost and leaving him wounded. The Elite Major dismounts from his Ghost and advances on the injured marine. Geoff raises his Assault Rifle, but it clicks as he pulls the trigger; he is out of ammunition.

Elite Major: (in English) Your destruction is the will of the Gods, and we are their instrument.

The Elite levels its Plasma Rifle at Geoff's head, but is distracted by the sound of gunfire. Two Minor Elites are shown shooting at something off camera. John-117 then crests a ridge wielding an Energy Sword, having apparently killed the two Elite Minors and taken it from one of them. The Elite Major shoots him several times with the Plasma Rifle but the shots are absorbed by his shields. The Spartan charges the Elite and stabs it in the stomach. The Elite clutches its stomach, fires its rifle several more times, then collapses. The Pelican flies toward Geoff and John-117.

Master Chief: Can you walk?

Geoff: Cortana told us one of you was on board, but I didn't believe her.

Master Chief: Enemy airborne battalion inbound. Let's get you on board. 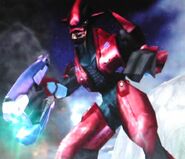 The early version of a Major Elite. 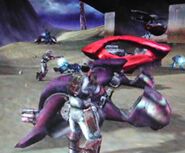 The early version of the Ghost and Spectre vehicles.

Thorn Beasts are seen in the trailer, though they were cut from the final game.
Add a photo to this gallery

Retrieved from "https://halo.fandom.com/wiki/Halo_E3_2000_Trailer?oldid=1812488"
Community content is available under CC-BY-SA unless otherwise noted.