The campaign consists of twelve missions spread across three acts. The player controls UNSC units from the Spirit of Fire to combat new foes.

Spirit of Fire, thought to have been lost with all hands and having drifted for almost 30 years, arrives at the Ark, a massive Forerunner installation capable of building Halo rings. Serina, the ship's AI, having long since begun developing rampancy due to a long service life, awakens the crew from cryosleep after leaving a final message for the Spirit of Fire's captain, James Cutter, stating it was an honor to serve with him, before destroying herself as per protocol. Cutter briefly mourns her, along with Professor Ellen Anders.

Cutter, unaware of the nature of the Ark or the current situation, sends Spartan Red Team, comprised of Jerome-092, Alice-130, and Douglas-042, down to the surface to investigate a UNSC signal coming from the surface. When the Spartans arrive, they find a UNSC research base that bears signs of having been attacked. They find the resident Logistics AI, Isabel, who attempts to warn them away, but an immensely powerful Jiralhanae ambushes the Spartans, easily overpowering them and badly wounding Douglas. Taking Isabel with them, the Spartans retreat to their Warthog to see that the area is overrun by a horde of Covenant who seem to have appeared out of thin air, and Jerome calls down Archer missile strikes to cover their retreat. Isabel, Jerome, and Douglas are extracted to the Spirit of Fire, with Alice being left behind.

Back on the Spirit of Fire, Cutter is debriefed by Isabel: the Human-Covenant War is over. However, the portal to the Ark inexplicably shut down, and a far greater threat appeared: the Banished, a huge horde of ex-Covenant warriors and pirates who killed all of Isabel's friends. Lead by the cunning Brute warlord Atriox, who had attacked the Spartans, this ever-growing horde had raided across Covenant space for years, and all attempts by the Covenant to put the Banished down failed. Isabel urges the Spirit of Fire to run, seeing no chance that a single, aged ship with half a crew could win against an opponent that even the Covenant could not stop at the height of their power. Cutter, however, realizes that Spirit of Fire is all that stands between Atriox and humanity, and inspires Isabel and his crew to stand and fight one more time.

The UNSC start by deciding to surgically weaken Atriox's command structure by taking out his subordinate leaders. Their first target was Decimus, a high-ranking Brute officer who is salvaging resources from the installation. Before he could be brought down, Decimus coldly orders Glassing Beam strikes down upon his own forces and retreats. Investigating the wreckage, Isabel discovers the Cartographer, a map of key systems and weapons upon the Ark. UNSC forces accompany Anders to secure a Forerunner elevator and ascend to the Cartographer.

Meanwhile, Alice contacts the Spirit of Fire. Having rescued a large number of UNSC POWs, she has been raiding Banished forces, making them fight on two fronts. Alice and her survivors are eventually extracted. Ander's forces reach the Cartographer’s map room, being delayed by the Ark's guard dogs: hordes of autonomous drones called Sentinels which have been woken up because of the Banished mining operations. There, Anders discovers that Atriox has hijacked the Ark’s portal network, allowing him to transport troops across the whole structure. While trying to shut down the portal network, Decimus arrives, and this time he is killed, and the network is shut down, dealing two heavy blows to Atriox's efforts.

Above the Ark, the Spirit of Fire is engaged by the Banished's CAS-class Assault Carrier, the Enduring Conviction. The Spirit of Fire begins to flounder, not having the firepower to take down a carrier. Professor Anders came up with a plan on how to escape back to UNSC-controlled space. Spirit of Fire had sacrificed its Slipspace drive back on Shield World 0459 and the Ark's portal to Earth was down, but there was another way: the Ark has produced another Halo ring and is holding it on standby, and if they launch it they can piggyback its Slipspace capability. The enemy flagship being the biggest obstacle, Isabel and Jerome are deployed to use a Forerunner particle cannon to immobilize the carrier and disable its shields so that the Spartan and AI could infiltrate it. While Jerome distracts the Banished troops guarding the ship, Isabel hacks into the ship and uses its Glassing Beam on full power on the Ark's surface, provoking an immense swarm of Sentinels to retaliate, shattering the huge capital ship in two.

Anders launches the Ring, and both UNSC and the Banished struggle to control the Ringworld's surface. Red Team's forces hold off Banished reinforcements from reaching the Ring and then join the fight. Anders, having disabled Halo's weapons systems and set a UNSC beacon, uses the Ring's gravity systems to eject the last of the Banished troops into space. However, before the Spirit of Fire can follow, the Halo, with Anders on it, enters Slipspace, with Anders promising Cutter that she will bring the UNSC as soon as possible. Back on the Ark, Atriox, infuriated by the repeated losses to the UNSC, prepares his horde for another attack.

Shortly after, Anders finds that the Halo has exited Slipspace too early. As she steps out into the open, a Guardian, a huge Forerunner construct, looms just overhead.

Like its predecessor, Halo Wars 2 includes a Skirmish Mode. The player can battle AI opponents across 8 multiplayer maps in 1v1, 2v2, or 3v3 matches. Skirmish has three game modes: Deathmatch, Domination, and Strongholds.

Development of Halo Wars 2 was outsourced to Creative Assembly, the same studio behind the popular strategy game series Total War.[9] Once again, Blur created the pre-rendered cinematics for the game.[15]

The Ultimate Edition of Halo Wars 2 was released on February 21, 2017, on the same date the standard edition, at a retail price of $79.99. It features a slightly different cover art with a part of the background covered in red. The Ultimate Edition consists of the base game along with the season pass, which includes 7 extra leaders and 2 campaign missions, and Halo Wars: Definitive Edition.

In the teaser trailer, a wounded Douglas-042 is being dragged by another member of Red Team, away from some form of enemy, most likely the Brute Chieftain seen later. Jerome-092 radios in, "Command, this is Red Team. Something hit us, Douglas is down. Immediate evac requested!" As he is dragged along, Douglas draws his M6C magnum, takes a moment to aim, then fires. The screen cuts to Red Team, sweeping an area with their flashlights. They encounter a large, hostile Jiralhanae, who picks a SPARTAN (probably Douglas) up by his throat, and throws him. It then returns to the wounded Douglas, firing another shot off into the darkness. This time, it cuts to Red Team being attacked from several angles by what can only be assumed to be Jiralhanae. Finally, after one more gunshot, several shots of Red Team attempting to retaliate (to no avail) are shown. After this, the camera cuts to Douglas who attempts to fire a fourth shot, but a "click" signifies his magazine is empty. Having no way to defend himself, he lets his right arm slip to the floor and his grip on the magnum loosens. Next, camera showcases the aforementioned Brute Chieftain properly, as he activates his energy mace, Chainbreaker, and growls, "Yes, run... Little demons." After cutting to black, the logos of 343 Industries, Creative Assembly and finally Halo Wars 2 flash onto the screen in quick succession. To close the trailer, there is a short shot of the Chieftain turning away from the camera, and ordering his cohorts to "Hunt them down." 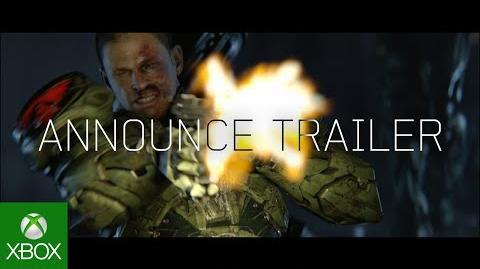 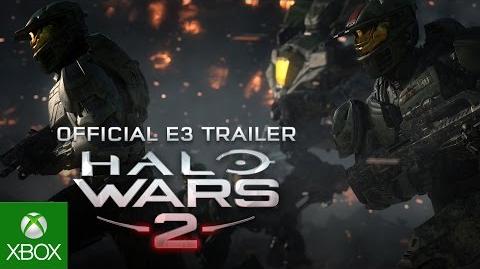 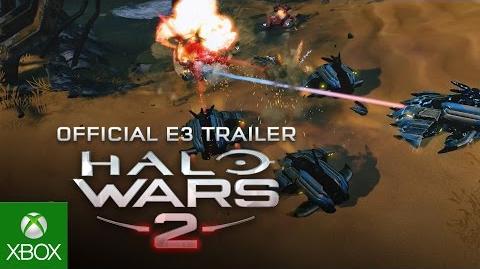 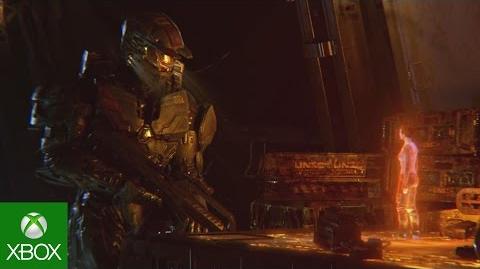 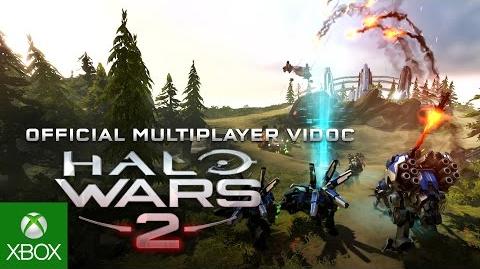 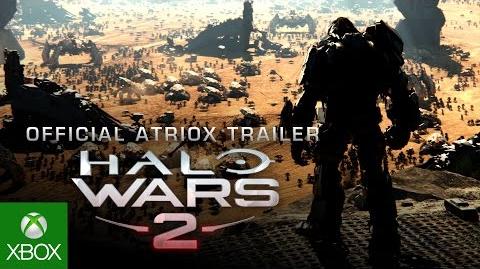 A 3D-printed model of Atriox.