The Halo Wars Limited Edition is a retail version of Halo Wars, which includes items not featured in the standard version. The cover depicts the Arbiter Ripa 'Moramee, who is a Covenant commander in the game, flanked by two Sangheili guards and followed by a massive formation. If the cover is flipped, the backside of the case is identical to the front of the regular edition of Halo Wars, with three Spartans backed by a large UNSC force of marines, vehicles, and aircraft of varying types.

Purchase of Halo Wars Limited Edition comes with the following:

If you buy the LCE in a country in which Xbox Live isn't available, it is impossible to get the Mythic map pack, Honor Guard Wraith, and the 48 Hour Gold Trial. This is due to the fact that all this requires you to go on Xbox Live, which unfortunately in those countries, is unavailable. 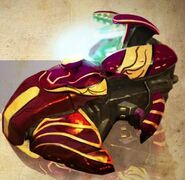 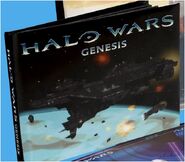 Halo Wars: Genesis.
Add a photo to this gallery

Retrieved from "https://halo.fandom.com/wiki/Halo_Wars_Limited_Edition?oldid=1804993"
Community content is available under CC-BY-SA unless otherwise noted.