Hang 'Em High is a medium-sized map suited for 4v4 action and is tailored for Slayer and Capture the Flag, the map is set inside a Forerunner installation on Halo. The map is a simple asymmetrical map with multi-leveled buildings on each side of the map. On the first floor, the map is littered with many small blocks which are referred to as Tombstones, and two small shelter structures on either side of the map, and in the center of the map lies a large trench. The second and third levels contain many ramps and bridges that connect both sides of the map and two structures on the top of each side that in CTF games serve as the base.

Hang 'Em High from another view.

The remake of "Hang 'Em High" as it appears in the debut trailer for Halo: Combat Evolved Anniversary.

The shadow of the assault rifle seen underneath the bridge. 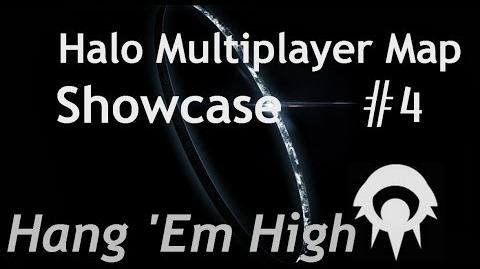