Are you looking for the planet of the same name?

Outside of Utgard, Harvest

Harvest, also known as War Games Map_Set/: 309-8,[1] is a multiplayer map in Halo 4.  Located on the world of Harvest, the map varies between small-vehicle combat, and close-quarters combat.  Although the map appears to be quite large, it actually does not take long to travel from one end to the other. Harvest was released as part of the Crimson map pack on December 10, 2012.[2]

The map is symmetrical in every way. There is a red side and blue side. The players spawn at the top of a platform on within each side, The platform can be accessed from two bridges and two man cannons. The bridges are towards the way the spawns face. The man cannons shoot behind the spawns. Once on the lower platform, the area is open and the player can go either towards the left or right. On the right of each base is a tunnel under an outcropping of the main structure. If you keep going up the middle from where the spawns are, there is a building. Within the building, there is a fork. The right path leads up to a little platform that you can then jump across to reach the upper part of the middle structure. The left path leads to an alleyway that can be followed, that leads to either side of the outside of the map, where rock ramps are. These alleyways go underneath the jumping platforms and can also lead into the ground floor of the middle building. On either end towards the right or left of the spawns, at the middle building, are man cannons that let you up to the upper part of the middle building. The main outside path continues into a tunnel straight under each spawn where the bottoms of the man cannons are.

These are the placements of either objective drops or random drops. 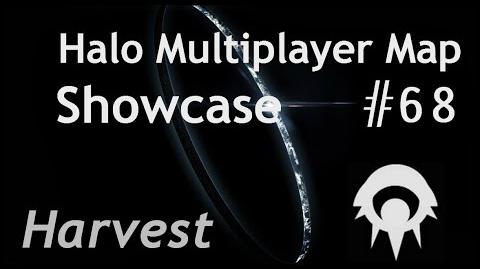 Concept art for map layout, lighting, and design.
Add a photo to this gallery

A path from Blue base to Red Base.

Path to Blue base.

Blue Team taking the flag from Red base.

A Red Spartan being run-over by a Mongoose.

Skybox of the map Harvest.

Background on Harvest
Add a photo to this gallery

Retrieved from "https://halo.fandom.com/wiki/Harvest_(Halo_4_Multiplayer_Map)?oldid=1791130"
Community content is available under CC-BY-SA unless otherwise noted.