The Hayabusa Powered Assault Armor is a type of United Nations Space Command powered armor, developed independently from the MJOLNIR Project. It is compatible with SPARTAN-II supersoldiers and components of the Mjolnir Armor.[1]

The Hayabusa is a powered battle armor system, similar to the Mjolnir Armor, except stemming from Project HAYABUSA as opposed to Project MJOLNIR. It was developed by RKD, an Earth-based "think-tank" in the year 2536, six years before the MJOLNIR Mark V first entered production. It was presented to the UNSC Ordnance Committee as an answer to the self-contained powered armor problem. Advanced materials are used in the production of the Hayabusa armor reducing the weight of the current generation armor by nearly a third at that time.

While HAYABUSA had different goals than its rival project, MJOLNIR, both programs resulted in powerful battle armor that boasted energy shielding. It is unknown though whether the original version had energy shields. The HAYABUSA project was intended to develop self-contained power armor, and the project eventually culminated in the development of the Hayabusa Powered Assault Armor, which was developed by Facility RKD on Earth in the year 2536 and was accepted by the UNSC Ordnance Committee the same year.

The Hayabusa armor's advanced materials decreased its weighty bulk by one-third, and is aesthetically Japanese in design. The armor was designed after ancient samurai designs. It includes spiked shoulder pauldrons (correctly referred to as s'ode). The purpose of the Japanese aesthetics was to instill fear in enemy soldiers while compensating for the armor's lack of defensive strength by angling the pieces to reduce ballistics penetration and providing a sleek, aerodynamic figure.

The Hayabusa armor's helmet was designed with a defensive and ultraviolet protective visor. Like all UNSC helmets, the visor is the weakest part. Thus, a small visor was designed to be more difficult to accurately penetrate. As such, the small visor provides for better protection of the wearer as well as better camouflage. The Hayabusa was designed with greater emphasis on heavy lifting and Extra-Vehicular Activity than the MJOLNIR. It is slightly slower and less dexterous than its MJOLNIR counterpart, though it is nonetheless highly effective and possesses most of the design features of the MJOLNIR Mark VI.[2][notes 1]

Although initially developed as its own powered armor system, it seems that the Hayabusa armor has been modified and adapted to be compatible with the next-generation Mjolnir Armor system. This allowed it to be available for use by the SPARTAN-II supersoldiers although its field deployment appeared to be extremely limited.

The helmet features seven angular spikes, one to each side, and the face plate is fused into a single piece and contour. The top rear guard of the helmet is pointed, revealing a protruding spike. The bottom rear, around the neck, forms a neck guard, like that of a samurai helmet. The seven spikes are always silver-white regardless of armor color. Clips can be seen on the side of the helmet.

Its shoulder pauldrons are replaced by three metal plates arranged in an overlapping fashion similar to the armor of a Japanese samurai, also known as the "sode."

The chest armor features a thick, round collar piece protecting the neck, as well as an angular strip of armor that appears to be strapped over the chest, featuring a small delta in the center.

The first sighting of the armor in use, discovered a mere few days before Halo 3's release. 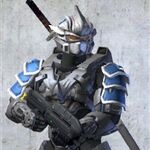 Hayabusa with katana. Available upon unlocking 49 of 79 achievements.

Hayabusa with katana during battle.