Were you looking for the standard Covenant Orbital Insertion Pod?

The Heavy Orbital Insertion Pod is the larger version of the standard Orbital Insertion Pod. It has a rounded shape, with a large hatch on each of the three sides. When the pod lands it deploys three landing struts to keep it steady and the three hatches slide upward. Once the pod has fully deployed it becomes pyramidal in shape. The pod most likely drops from ships, and freefalls through the atmosphere the same way the standard version does. It appears that when the Heavy Orbital Insertion Pod is nearing the ground, it fires three engines which are in the corners on the bottom of the pod to slow it down. The engines continue to slow the pod, until it reaches the ground. The hatches on the three sides of the pod start to open when the pod is several meters above ground. This variant is used by the Covenant to get troops, and possibly small vehicles, to the ground faster and in greater numbers. It was first sighted during the Fall of Reach, but possibly used in other battles. 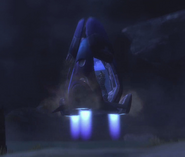 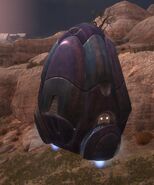 Jiralhanae in a Heavy Drop Pod.

A Heavy Drop Pod crushes a Warthog.
Add a photo to this gallery

Retrieved from "https://halo.fandom.com/wiki/Heavy_insertion_pod?oldid=1791174"
Community content is available under CC-BY-SA unless otherwise noted.