The Heavy plasma cannon is a Covenant directed energy weapon. Essentially a more powerful version of the Class-2 Energy Guns mounted on T32 RAVs, the heavy plasma cannon fires bolts of superheated plasma and can be found mounted on many Covenant vehicles, including Spirits, Phantoms, and the Seraphs.[1]

The Heavy plasma cannon has gone through multiple changes throughout the games, possibly indicating that there are multiple variants of the weapon.

In Halo: Combat Evolved, the gun is outfitted on Spirit dropships and is very similar in shape and in the ammunition it fires to the Shade turret. The cannon has the shape of a ball with three prongs attached that fire a burst of needle-like purple plasma bolts. The "ball" seems to levitate below a fixed casing structure that has two wings on the side. The gun also has limited mobility, and cannot fire directly below or above it and is also limited in its sides. The gun can, however, fire through the body of the Spirit when an enemy is on top of it, and is likely just a glitch. It also fires three shots at per round, just like the Shade Turret.

In Halo 2, the cannon changes its appearance and is now outfitted on Phantom dropships. The gun seems more mobile and has multiple "joints." The ammunition it fires has also changed, it now fires big red bolts of plasma at a slower rate, but these do more damage.

In Halo 3, the design is mostly the same, but the bolts it fires are slightly different, being less powerful. The cannon also seems to fire faster than in Halo 2.

In Halo: Reach, the plasma cannon is again outfitted on both Spirit and Phantom dropships, as well as on the Space version of the Banshee, the Type-27 Exoatmospheric Multi-role Fighter and on the Seraph fighters.

The heavy plasma cannons mounted on both the Space Banshees and on the Seraph fighters greatly vary in shape (the ones mounted on the Space Banshees are very elongated, and the ones on the Seraphs are very small and build into the "wings"), but both fire the same type of ammunition, smaller sized blue plasma bolts, which are fired faster but do less damage than the normal "concussion" version of the heavy cannon mounted on the Phantoms and Spirits.

Also, the Phantom Gunboat, a new space version of the Phantom introduced in Halo: Reach is equipped with two new space combat versions of the cannon, one chin mounted gun with three long prongs at the end, and multiple smaller cannons mounted on the sides. Even though the chin-mounted cannon and the side cannons look different, they fire the same type of big blue plasma bolts, similar to those from the normal "concussion" version. 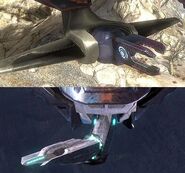 Comparison of a Phantom and Spirit's heavy plasma cannons.

A render of the Phantom's Heavy Plasma Cannon in Halo 3.

A view of the cannon mounted on the Spirit.

A view of the mounted cannon firing.

A Heavy Plasma Cannon variant attached to the sides of Phantom Gunboats and Corvettes.
Add a photo to this gallery

Retrieved from "https://halo.fandom.com/wiki/Heavy_plasma_cannon?oldid=1791175"
Community content is available under CC-BY-SA unless otherwise noted.