Heian[1][2] is a world in an unknown system in the Milky Way galaxy. The planet is terrestrial, with a breathable atmosphere and an Earth-like surface. Meteor showers are common on this world, as thousands of asteroids orbit the planet.[3]

At some point predating both modern Humanity and the Covenant, the planet was inhabited by a Prehistoric human civilization who likely vanished at some point, as their cities were abandoned, yet mostly intact, by the 26th century. It is unknown if this civilization was somehow linked to the Forerunners.

During the Human-Covenant war, the world was the site of an important Covenant logistics base, from which supplies were delivered to the rest of the planets in the system, as well as the entire sector. The UNSC deployed a team of ODSTs and a Spartan on the planet, with the mission to assassinate the Prophet in charge of the operations within the system, in order to stop the Covenant supply chain. The team were also tasked with gathering intelligence on the unknown ruins. The team succeeded in their mission, but the Spartan was lost in combat against a Hammer-wielding Brute and an ODST, Checkman, was killed after striking an asteroid in orbit and burned up in the atmosphere after losing control of his SOEIV.[3] The photographs taken by the team were later studied by the Department of Xenoarchaeological Studies at the University of Edinburgh along with the University of Calcutta as a part of an extensive investigation of Forerunner relics.[1]

The origin of the ruins on the planet is a mystery. Their architecture appears to be a mix of a variety of ancient Human architectural styles, including Greco-Roman, Middle Eastern and East Asian styles, with subtle Forerunner themes.[1] The East Asian themes are clearly among the most prevalent in the structures, including decorations containing dragon-like creatures and statuaries distinctively similar to statues of Buddha.

Most of the buildings have pagoda-like roof structures. Overall, the designs are very ornate and full of carvings. Curiously, the overall scale of most structures is massive; one step in a staircase may be the height of an average human. Some structures seem like a mix of ancient and relatively modern industrial architecture, including a water processing facility with aqueducts and valve systems nigh-identical to those used by humans.[3]

The ruins also sparked interest within the scientific community. The Department of Xenoarchaeological Studies at the University of Edinburgh, when analyzing the photographs taken by the ODST team from the ruins on Heian, found the obvious elements of Human architecture in the structures puzzling, wondering if their builders borrowed from human architecture or the other way around.[1] The ruins may be human-like due to ancient humans inhabiting it. 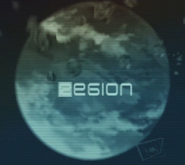 Heian in a UNSC briefing screen.

Readout of the planet's system.

View of scenery on the planet.

Statues in the ruins.
Add a photo to this gallery

Retrieved from "https://halo.fandom.com/wiki/Heian?oldid=1791176"
Community content is available under CC-BY-SA unless otherwise noted.