Hellomyname Keyes is an easter egg in Halo: Combat Evolved referring to an error on the nametag of Captain Keyes' uniform.

A patch on Keyes' chest reads "HELLO MY NAME," and the patch beneath it reads "KEYES." On the left of the badge the Marathon symbol can be seen.

One can view the nametag using a 2x-zoomed pistol in the level The Pillar of Autumn or a 2x/8x/10x-zoomed S2 AM sniper rifle in the Truth and Reconciliation. The patch can be seen more reliably using Halo Map Tools; it is the first decal listed in Bitmap (capn_patches_decal). It can also be seen clearly in the cutscene during which John-117 arrives on the bridge of the Pillar of Autumn.

A closeup to Captain Keyes's nametag. 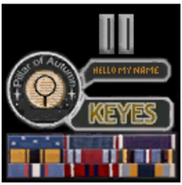 Hellomyname Keyes as seen in Halo Map Tools.
Add a photo to this gallery

Retrieved from "https://halo.fandom.com/wiki/Hellomyname_Keyes?oldid=1791187"
Community content is available under CC-BY-SA unless otherwise noted.