Were you looking for the first level of Halo 2?

Inside the Pious Inquisitor,[1] traveling with the Fleet of Retribution[2]

“Because of its speed and luxury the Pious Inquisitor has become an irresistible prize during these dark times.”
— Map Description

Heretic is a Halo 3 multiplayer map that was shipped on September 22, 2009 with Halo 3: ODST, as a part of the Mythic map pack. It is a remake of Midship, a Halo 2 multiplayer level.[4]

The map takes place inside the Pious Inquisitor, like its predecessor. Outside the map, the player can see a fleet of CAS-class assault carriers and CCS-class battlecruisers, all heading slowly for an unknown gas giant. On the opposite side of the map, another planet or a moon of the gas giant can be easily made out. A distant star illuminates the planets, and a massive orange nebula surrounds the Sun. The interior is typical of Covenant design. With dark pink walls and surfaces, as well as gray colored floors and walkways.

The crest of the hidden skull on this level appears to be the Mark of Shame.

An overhead view of Heretic.

Note the other ship in the background.

The planets and sun outside the Inquisitor.

Part of the Covenant fleet, speculated to be Regret's fleet from Halo 2.

One of the Da Vinci Cubes that can be found in the Gravity Lifts on the map.

A multiplayer match on Heretic

A view of the map 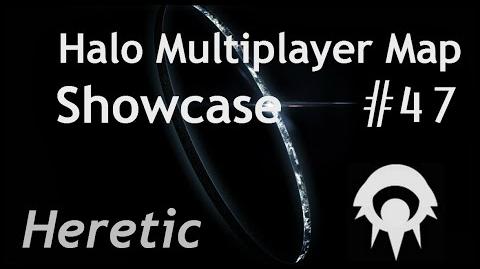