High Charity is the fourteenth and penultimate campaign level of Halo 2. As John-117, you must battle your way through the Flood-infested High Charity to stop the Prophet of Truth before he boards the Forerunner Ship. This is the last level you get to play as John-117 in Halo 2. This level is also the only time when Master Chief sees the Flood in combat in Halo 2, and also the only level in the game where you have no allies aiding you. It is also the shortest (playable) campaign level. You can find the Iron Skull on this level.

John-117 drops down a grav-lift just in time to see the Phantoms containing the Brute Chieftain Tartarus and the Prophet of Truth fly away. He walks over to High Prophet of Mercy, who has yet to be killed by the Infection Form.

Master Chief picks up the Flood form, squeezes it, it pops, killing Mercy in the process. Cortana's hologram appears on Mercy's throne.

The view shows In Amber Clad crashed into a nearby tower.

John and Cortana then watch as a Pelican crashes on the platform, and soon the Flood Combat Forms inside the dropship run out.

After John reaches to the top:

As John watches a skirmish between several flood combat forms with a swarm of drones and one brute:

If John remains in the chamber for too long:

Once John leaves the room:

Please, Make Yourself at Home

Once John reaches a part of a tower.

Once John reaches a lift:

Cortana: "Apparently, these are the Prophet Hierarch's private quarters. Their inner sanctum."

John enters the Inner Sanctum amidst a fight between several Covenant defenses and Flood forces.

Once John reaches the top via another Gravity Lift:

Once More, with Feeling

If John continues to stall and not board the ship.

John enters the conduit on a large, green beam of light. The Forerunner dreadnought starts to launch, and he enters through a large portal, landing with scrapes flickering off his armor.

Cortana: "Chief, when you get to Earth...good luck."

Master Chief: "After I'm through with Truth..."

Cortana: "Don't make a girl a promise...if you know you can't keep it."

Cortana watches the ship rise, and exit through the top of High Charity, where Brute-controlled and Elite-controlled ships are continuing to destroy one another. Soon the Dreadnought enters slipspace, and vanishes.

The Dreadnought outside of High Charity.

The interior of High Charity.

The three Phantoms fly away from the platform. 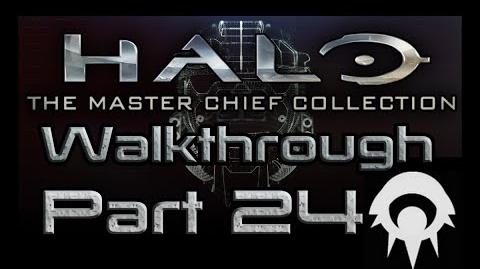