High Ground is a multiplayer level in Halo 3 and Halo Online.[1] It is located in an old UNSC base, near New Mombasa that was reactivated after the Slipspace cataclysm that severely damaged the city. One of the few asymmetric maps in the game, High Ground is great for one-sided objective games such as One Bomb, One Flag, and Territories.

High Ground is an asymmetric map featuring an elevated, crumbling, UNSC base positioned along a beach. Low, eroded cliffs lie to the north, east, and west of the base, with the beach lying south of the base. There are multiple ways to approach and enter the base; through the main gate (that is closed only in asymmetric gametypes), or through side passages, which offer more protection and discretion.

Attacking players spawn at the south side of the map, aptly named "the beach." If the main gate is open, it can be used as a quick entrance to or exit from the base.

A variety of weaponry and equipment has been placed near the beach to aid attackers in storming the base. Perhaps the two most valuable weapons include the Sniper Rifle and the Rocket Launcher, though the latter can be reached by the base defenders if they use vehicles. In most games, a battle for control of the Rocket Launcher ensues at the start of the game, and repeats whenever the weapon respawns. Players can also find a Shotgun, Portable Gravity Lift, Bubble Shield, Active Camo, and Overshield to aid in their attack. In addition to the weapons and equipment, players can choose between a Mongoose or Ghost to get to the base wall faster.

This large, crumbling base on the northern side of the map is where defending players spawn. In the back of the base, there is an unusable Surface-to-Air Missile Launcher. Several vehicles, including Mongooses and a Ghost, spawn just east of the launcher, allowing defenders to quickly catch fleeing attackers, or for attackers to make a quick getaway.

A broken down control room is located in the center of the base, complete with computers and a radio set. This control room is the objective area for CTF and Assault gametypes, containing the flag spawn point and bomb plant point, respectively. Farther east is the "Pipe Room," where attackers can enter the base via a small pipe that connects to the front of the base.

The western half of the base is mostly indoors, and offers two levels of play. The lower level connects the base to a pillbox bunker lying just outside the base's walls; the level also has multiple entry points inside the base. The upper level is used as a choke point to keep attackers from reaching the gate controls on the catwalk. If a player is able to access the gate controls, the base wall gate will be permanently opened, as is the case with the gates in Zanzibar and Last Resort. The base is designed to promote dual-wielding, and as such, a number of dual-weldable weaponry can be found behind the base wall.

The base wall is an important area for defenders, as it gives them a view of most of the beach. Defenders on the wall, however, are vulnerable to Battle rifle and Sniper Rifle fire from the beach. The wall acts as a bridge, connecting the base's eastern side to its western side. On the western edge of the wall, there is a tower where a Spartan Laser and two Fusion coils spawn. In addition, a Machine Gun Turret is mounted above the main gate, which is useful for beating back approaching rushes and vehicles. The Rocket launcher can be accessed by defenders as well, if they quickly rush up and over the base wall, beating the attackers.

The calm before the storm.

The base from above.

Inside fort on High Ground.

The Megabloks render of an assault on High Ground.

Player being hit with the Spartan Laser on High Ground

Player hiding in cave next to invisibility power up 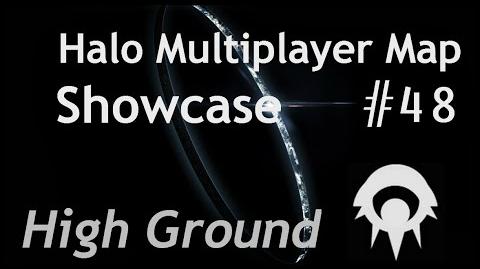