“Despite millennia of abandonment, transportation facilities like this one continue to function flawlessly.”
— Halo Waypoint - Halo Bulletin 11/9/11[1]

The map is set in a massive Forerunner generator complex which powers a portal, connected with a number of locations. The generator is built to handle something of the size of a Forerunner's keyship.[1] The playable area itself is an observation platform, barely sheltered from a storm raging just outside, creating a whirlwind of dust and debris around the center of the portal. Part of the structures in the playable space are partially covered in sand.[3] 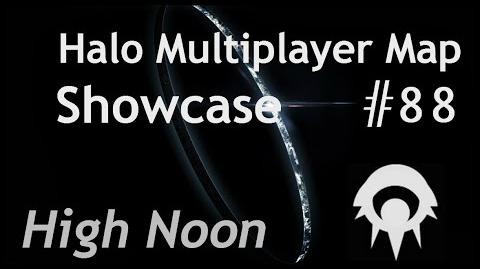 Spartans engaging each other on High Noon

The 'Bunker' area of the map