The Hugging Elite can be seen in a special non-canon cutscene at the end of Halo: Combat Evolved and Anniversary by beating The Maw on the Legendary difficulty.

A Stealth Elite is seen wrestling with Sergeant Johnson over an Assault Rifle. They abruptly end their fight when they hear a rumble and realize the nearby UNSC Pillar of Autumn is beginning to explode. Johnson then spreads his arms, saying, "Oh shi-- This is it, baby. Hold me." Before the ship's reactor detonates, the Elite obliges and hugs Johnson, then moves one of his hands to grab his rear just before the screen fades to white. In Halo: Combat Evolved Anniversary, the Elite is a Zealot, and Johnson touches the Zealot's rear instead of the other way around.

This cutscene, while only viewable on the Legendary difficulty setting, is not canon, since it was specifically made as fan-oriented humor. This contention is supported in the novel Halo: First Strike, which reveals that Johnson and a few other survivors boarded a Pelican just in time to escape the explosion, which puts the existence of the Elite to an end. 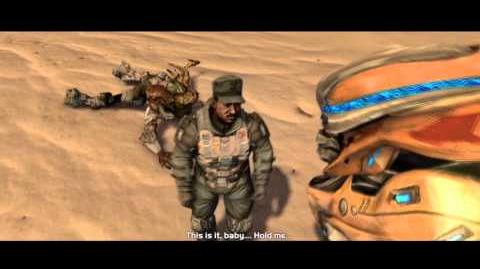