i love bees (ILB) was an alternate reality game developed by 4orty2wo Entertainment as a marketing campaign for Halo 2 during the summer of 2004. The ARG utilised the website ilovebees.com as the hub for the marketing campaign. Ostensibly a beekeeper's personal site, the server appeared to have been taken over by an unknown artificial intelligence whose thoughts are scattered on the site.

The site was first discovered by fans of the Halo series on July 23, 2004, within a subliminal message in the Halo 2 theatrical trailer.[1][2] The message would lead viewers to a beekeeper's website that appeared to be hacked at first glance. The frontpage shows a floating counter counting down to specific time, all of which relates to the Alternate reality game. The first countdown ended on July 27, accompanied with the following message, "network throttling will erode." The subsequent countdowns displays "this medium will metastasize" on August 10, and "wide-awake and physical" on August 24. Currently, the countdown is counting down to the day the Covenant will attack Earth.[note 1]

A message on the frontpage would direct the viewers to a blog of the beekeeper's niece, Dana, who seeks technical help to restore the site to its original state.[note 2]

The game begins with the participating viewers to locate all of the payphones (or Axons as referred by Dana) across the United States. Participants who answered the axons at each countdown would be given a recording of an AI and be asked basic questions about the character. If answered correctly, an audio clip would be released and a number would be added to the counter of the website. The audio clips, when threaded together, formed an audio drama about the characters in the Halo Universe. When the number reached 777, the AI, as played by a voice actor instead of a recording, would begin to interact with the players through the payphones. The AI would question the participants on general subjects such as name and jokes.

After the game was over, the participants were given access to play Halo 2 multiplayer before its release at various sites across America. Access to these sites would be granted provided that the participants say "The Operator left a message for me," though not all hosts of these sites were aware of the marketing campaign. At each event, participants were given DVDs of the marketing campaign, containing all of the audio files, as well as deleted materials.

Players wait at a payphone. 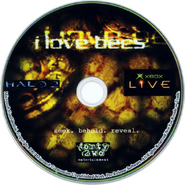 The DVD disc of i love bees.

DVD menu of i love bees.

Current status of ILoveBees as of April 9, 2014.
Add a photo to this gallery

Retrieved from "https://halo.fandom.com/wiki/I_love_bees?oldid=1814042"
Community content is available under CC-BY-SA unless otherwise noted.