Impact, also known as War Games Map_Set/: 449-2,[1] is a Forge environment available in Halo 4. This map has the Forge pieces set to a UNSC pallet. The map takes place in space, on two asteroids which have been used by the UNSC at some point.[2]

As said previously, the map is set on two or more asteroids which have several UNSC structures built into them. The Background of the map features a nebula on one side and a crumbling planet on the other.

The space outside of the asteroid can be used to Forge, although to a certain distance only. There is also an extremely subtle change in the gravity and movement of the player. Furthermore, this map also contains some Forge pieces such as the Station Core piece, the Corridor piece, the UNSC 2 Story piece, and the 4-Way Large Corridor piece, which are unique to this map only.

This map also features an object known as a Gravity Volume, which can alter the gravity inside it. It is possible to flip the object over, leading to opposite gravity.[2]

The map contains a facility stationed on the largest asteroid, which appears to be excavating a mysterious meteorite.  It can be observed that there is a circular hologram floating above the meteorite; this is no ordinary hunk of space-rock.  Around the map, there is a small "asteroid belt." Several nebulae can be seen in a 360° radius around the map. 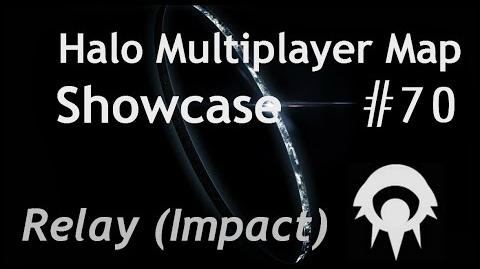 The second Forge-able asteroid on Impact