Looking for the Flood Infection Form?

Infection is a multiplayer gametype in Halo 3, Halo: Reach, and Halo 5: Guardians.[1] It is the official Zombie mode modeled after zombie mode's popularity as a custom game in Halo 2.

The object of the gametype is for the players to stay "uninfected" as long as possible while the zombies try to kill every living player. The number of players starting out as Zombies, "Alpha Zombies," can be changed in the options and are selected at random from the start. When a Zombie kills a "living" player, they are "infected" and they become a zombie. When there is just one living player left, he/she is declared "Last Man Standing."

On October 31, 2007, a specialized Halloween Matchmaking playlist was available, which played this game mode with up to 13 players (it being an "unlucky" number).[citation needed] This game type's popularity allowed it to become a "regular" among Double EXP Weekend games. It was repeated again on October 31, 2008, but unlike other occasions, the October 31, 2007, 2008, and 2009 ones were Ranked. The others were mainly Social.

In Halo: Reach there are two default variants: Infection and Safe Havens. By default, zombies have the Evade armor ability, move faster, and can jump moderately higher than humans, making them harder to kill. In Safe Havens, humans can only deal half the normal damage but can still kill zombies with a headshot. Safe havens grant only humans inside it invincibility and normal damage until they leave its boundaries or it moves. The effects the havens give can be completely customized, as well as the rest of the variant. It should be noted, however, that if an infected player quits the game then a non-infected player will take his/her place. It's unknown if this is a bug or if it was intended. Either way, this can lead to confusion to the switched player.  In May 2011, Bungie released a new Infection gametype called Alpha Zombies.  In this version, the players who start of as zombies have a red armour colour and have unlimited sprint, however humans who get infected will not have unlimited sprint.  Also, the alpha zombies have a little more health (4 pistol shots to kill) and the lobby size has increased to 12 people.

Halo 4 has a replacement for this gametype known as Flood.

The Infection gametype being played on Halo: Reach.

A SPARTAN-III punching a zombie in Infection.

Concept art of the flood upper-body for the Infection gametype in Halo 2: Anniversary.

Concept art of Flood forms for the Infection gametype in Halo 2: Anniversary. 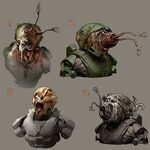 Concept art of various Flood-infected SPARTANs for the Infection gametype in Halo 2: Anniversary.