This article is about the Halo PC multiplayer map. For more uses of the term Infinity, see its disambiguation page.

Infinity is a multiplayer map exclusive to Halo PC. It is the longest multiplayer map, being a long canyon shaped in an ∞ (Lemniscate or "Infinity") symbol, hence the name infinity. It's considered one of the best maps for the race gametype.

Infinity consists of two large bases containing a large signal beam emitter as seen in the single player level Halo. Going into the beam will kill you, but only if the beam hits you while you fly over it in a banshee or if you crouch while standing over the emitter. Simply standing will not kill you. One emits a red beam, the other blue. It houses two Banshees at the top of each base, as well as Shades a bit further down. A smaller, secondary building lies below, containing a health kit, a shotgun, and an assault rifle. On top of it is a Fuel Rod Gun, unless the gametype is CTF, in which case the heavy weapon is located in the middle of the cross section plateaus near the bridges. In that case, the flag is on top.

In the center of the map, there are four long suspended bridges, similar to the ones seen in the beginning of the Halo campaign map. The top two bridges hold a Rocket launcher each. At the ends of either of the lower bridges are teleporters and in the middle are Health kits. There are also ladders leading to the top bridges. There are small ridges in between each upper bridge that each contain a Shade. There is also a small maze-like structure on one of the routes to blue base. Commonly called "the pipes" by players, a flamethrower, a Health kit, a shotgun, and sometimes a ghost can be found here.

One of the two paths to red base contain a pair of short tunnels. This area includes an assault rifle, a plasma pistol, a Shade, and two plasma grenades.

The other path to red base consists of a raised road and a lower non-paved path. There is a ledge with a Health kit, a sniper rifle, and a Shade.

There is a glitch to get out and pass the invisible wall using a Banshee while hovering and backing into the wall, much like getting to the sniper's rock in the multiplayer level Blood Gulch. 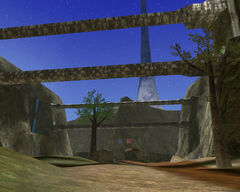 Infinity seen from below. 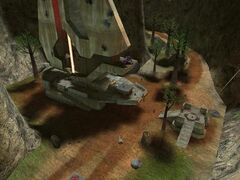 Infinity seen from above.
Add a photo to this gallery

Retrieved from "https://halo.fandom.com/wiki/Infinity?oldid=1731337"
Community content is available under CC-BY-SA unless otherwise noted.