This article is about the level. For the super carrier, see UNSC Infinity

and for other uses, see Infinity (disambiguation).

Infinity is the fourth campaign level of Halo 4.

The level starts off with a cutscene of John-117 observing the UNSC Infinity lose control and crash in the jungle. He proceeds to fight his way through Promethean forces to reach a Forerunner structure, where he reunites with Lasky and the Spartan-IV Sarah Palmer. Along with a few marines, John clears out a landing zone for a Pelican to extract them. He discovers Jul 'Mdama's Covenant have allied themselves with the Prometheans. John and a detachment of Spartan-IVs land near the Infinity, where they use a Scorpion and a Warthog to fight through Covenant forces, reaching the Infinity. John-117 then utilizes a Mantis to clear out Covenant and Promethean soldiers to reach the weapon controls for the Infinity. After clearing off several waves of Covenant Phantom dropships, he activates the weapons for the Infinity, firing at the Didact's Ship and causing him to retreat.

Scene opens on a jungle and pans down to Chief.

Camera changes angle to show the Didact is scanning the crashed Infinity. Several Covenant ships also converge upon the crashsite.

Chief makes his way down through the fog-laden jungle.

John finds a clearing with several Promethean Knights , but they teleport away before engaging. A squad of dead Marines is left in their wake.

John listens to the recording from the Marine's recorder chip.

The transmission falls silent after some gunfire. John-117 then continues to trudge through the jungle, but stumbles upon some Crawlers and Knights. John eliminates any hostiles in his way before coming to a small ledge where a Knight has just stabbed a Marine with its blade arm. The Marine detonates a grenade as he dies, killing the Knight.

John examines the object in question. Upon activating it, Cortana chimes in.

Nearly a dozen enemies are lit up on John's HUD. John clears the area and proceeds.

John makes his way forward and finds a dead Marine with his IFF tag. John examines the IFF tag and a transmission from Lasky and company is played back.

John continues through the jungle, encountering resistance as he goes.

After clearing a group of Crawlers and ascending some convenient tree limbs, John reaches a small Forerunner structure with a sealed door. The IFF tag is on the ground along with crates of UNSC equipment and weapons.

John examines the IFF tag and a transmission from Lasky and company is played back.

Suddenly, several IFF signals appear on Chief's HUD; just on the other side of the door.

The door to the small Forerunner structure opens and John-117 is revealed to the Marines that barricaded themselves inside. Three Spartan-IVs emerge and survey the area. Lasky approaches John.

Lasky extends a hand to John, and they shake hands.

Camera focuses upon an unmasked Commander Palmer giving orders to the Spartan-IVs.

Palmer saunters over to John with a look disbelief and amusement. She levels him up.

A radio transmission cuts John and Palmer's encounter short. John, Lasky and Palmer divert their attention to the Marine with the operable radio.

The door closes and the trio, along with the rest of the Spartan-IVs gather around the radio.

Del Rio signs off. Lasky is visibly dismayed by the situation and Del Rio's lack of support.

John, and two Marines emerge from the small Forerunner structure.

Enemies are immediately upon John and the Marines, but the group makes quick work of the hostiles. John passes a UNSC radio on the ground. Marines, gunfire and screaming can be heard through the transmission.

John and the Marines press forward.

John finds the four Marines engaged with a large group of Promethean hostiles. Upon approaching many of the Marines will comment in disbelief.

Crawlers, Watchers and Knights, as well as two turrets, now block the passage between the Marines and the path to the LZ.

John-117 and the Marines clear the area and approach a sealed door. UNSC turrets and weapons are scattered along the hilltop.

Chief removes Cortana and inserts her into the pedestal near the entrance.

John-117 and the Marines repel a wave or two of Prometheans.

Eventually all the enemies are cleared.

John retrieves Cortana from the interface. The door opens into a cave. As John pushes through, there is distortion in his HUD.

John proceeds down the cave system. Suddenly, a Knight appears at the opening on the far end of the tunnel. The Knight appears to be ordering a small group of Unggoy.

Chief enters the clearing and begins eliminating both Promethean and Covenant enemies.

A Covenant Phantom sends in more troops and Knights teleport to the assault.

An emergency transmission from Infinity interrupts.

As John boards the Pelican, scene fades to black.

Gameplay continues as the Pelican drops John-117 at the rally point. A large group of Marines are pushing towards Infinity. John is spearheading the effort.

The path to Infinity consists of large expanses under the jungle canopy. A Scorpion tank is available to make the final push.

John-117 and fellow Spartans make their way to the hangar, encountering resistance from Wraiths, Ghosts and dug-in Covenant infantry.

John navigates the vehicle onto a lift and enters the hangar bay. Covenant forces have overrun the area, including a Hunter pair.

John-117 exits the hangar and proceeds to activate and enter the Mantis.

John activates the weapons systems and destroys the door to the maintenance causeway. Promethean and Covenant forces line the corridor, but John-117 pushes through.

Several Promethean Knights and Unggoy equipped with Fuel Rod Cannons block the path between John and the lift at the end of the causeway.

John-117 terminates all hostiles and boards the lift.

John exits the lift in the Mantis. A short hallway opens to the outer hull upon which the MAC cannons are currently inoperable. Three Covenant jamming devices along with Covenant defenses patrol the outer hull. In the distance, several Covenant CRS-class light cruisers and the Didact's satellite survey Infinity's crashsite.

The second jammer is destroyed.

John manages to disable all three jammers and the AA guns begin to fire upon the Covenant.

John-117 secures the outer hull and the Infinity's defenses begins to repel the Covenant cruisers.

The combined fire draws the Didact's satellite away from the Infinity.

A hologram depicting a Promethean Knight is displayed on the holodeck.

Lasky displays a holographic image of one of the remaining Halo rings and a base constructed in the asteroid field.

A wealth of concentrically-aligned Forerunner glyphs are display holographically.

Palmer cuts-in and hands a datapad to Del Rio.

Del Rio walks away. Chief and Cortana simply stare at each other in silence, perhaps quietly condemning their current predicament. Scene fades to black. 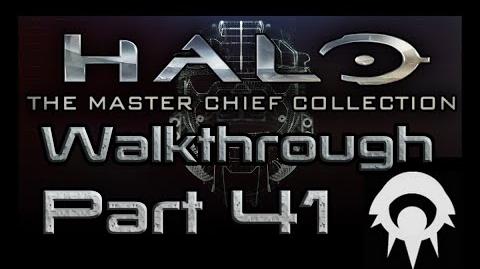