This article is about the scientific unit. For more uses of the term Infinity, see its disambiguation page.

Infinity Science is the scientific unit stationed aboard the UNSC Infinity. The civilian complement of the Infinity totaled a crew of 477.[1] It is unknown exactly how many of these 477 are members of Infinity Science versus the Class-61 Techs who maintain Mjolnir armor and various other staff and crew. Science teams are known to occasionally be deployed alongside Spartan units.

Infinity Science has several teams primarily dedicated to xenoarchaeology, with secondary specializations in astrophysics, microbiology and xenoengineering. Infinity Science has both designated in-field teams and research teams stationed on the UNSC Infinity. The Forge Group is responsible for locating and designing combat simulations for War Games.[2] It is also possible that Infinity Science made use of Huragok, especially when dealing directly with Forerunner artifacts.

It is possible, albeit unconfirmed, that Infinity Science briefly helped identify and mark locations within Requiem, since FLEETCOM had complete scans of the world when the UNSC Infinity returned the following year.

In 2558, during the return of the UNSC Infinity to Requiem, Infinity Science played an important role in establishing bases on the planet's interior surface and studying the Forerunner tech therein. Teams of scientists spread out across the planet, studying and categorizing everything they found.

The Forerunner chambers Gagarin was studying when the team disappeared. 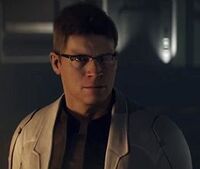 Dr. Henry Glassman, a lead scientist among Infinity Science.
Add a photo to this gallery

Retrieved from "https://halo.fandom.com/wiki/Infinity_Science?oldid=1791340"
Community content is available under CC-BY-SA unless otherwise noted.