Isolation is a multiplayer map featured in Halo 3 that takes place at a Flood Containment Facility on Installation 00. The environment is a small, isolated bio-bubble that has contained the Flood on the Ark. The Milky Way galaxy hangs in the sky. The top level is grassy and untainted, but in the underground caves, there is an obvious Flood contamination. Its open layout, with two bases, makes it a good map for Slayer, Team Slayer, and Symmetrical Objective gametypes.

Despite its regular appearances in Free for All and Team Slayer matches, it was designed for symmetrical objective games. It features two symmetrical underground bases, a grassy hilltop above, Forerunner architecture, and the underground caves of Flood infected biomass.

Isolation has an ovular shape to it when observed from above. It is a symmetrical map that consists of two levels: above and below. The upper level is a grassy hilltop with Forerunner architecture woven into the terrain. To the north, at the crest of the hill, lies a silver-Grey multi-level Forerunner structure. A battle rifle spawns at either side of this tower. It can be used either for shelter (underneath, where the Shotgun spawns) or as a sniper perch (by standing on top). Directly behind this sniper perch is an escape chute that provides quick, one-way access to Isolation's lower level through a Porta. From here, the player can go to his left (east), right (west), or move forward (to the south); you cannot regain entry to the sniper perch by going back up the chute, not even on a ghost or mongoose.

Going left or right will lead to one of the cave's side entrances. At either entrance is a man cannon, which will blast you back to the top of the map. Going south will take you toward the mouth of the cave. Midway through the cave, there is a concrete bunker on either side. The bunkers have portholes for weapons fire. The bunkers can't be entered here. A little further south is where the Rocket launcher and Ghost spawn. At the southernmost end of the cave, a thin rock ridge extends upward around the map's wall. This makes for another excellent sniper spot. Directly above the mouth of the cave is another Forerunner structure in the shape of an archway, which is rusted-brown. There is another drop-down here, which will put you near the Ghost/Rockets.

On the east and west sides of the map, in front of the two Man Cannons, is a Mauler, and next to that an entrance to each of the respective bases. A Regenerator exists in the main pylon of each base, as well as a battle rifle, Spike Grenades, and a Brute Spiker. You can either take a ramp down, or drop in from a hole above. Just above this area is the Brute Shot, a battle rifle, fragmentation grenades, and a Mongoose.

Isolation has been slightly altered for Matchmaking. The only immediately noticeable change is the removal of the Flare from the Silver Structure on Topside. Flares now no longer occur in any matchmaking game. 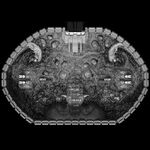 Looking north from the rock ridge.

The Ark, as seen from Isolation. Note the missing planetoid in the middle.

Isolation seen from above

A battle in Isolation. 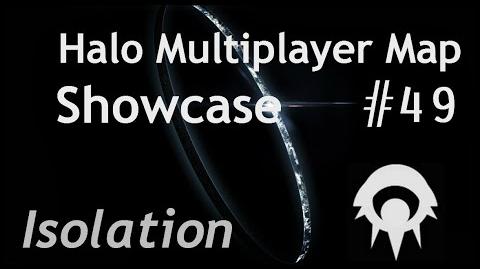