In the middle of Ivory Tower there is an alley that leads to a drainage grate where you will find the Rocket Launcher in most game types. This alley leads to a circular area with a palm tree sitting at the base of a set of giant stone steps inlaid with grass. These steps lead up to an elevator and two hallways. One hallway leads to a dark room and the other leads to a lighter room that bears the Overshield. The elevator can either take you to the upper part of the map that has the Sniper Rifle or the lower part of the map where you can acquire the Energy Sword.

To take the elevator up would place one in the middle of a long hallway. One direction leads to a dark room with air vent lifters and a shotgun, and the other direction leads to a ramp that contains an overshield. To take the elevator down from the main circular room brings you to the middle of another long hallway. Left and right directions have a small room housing a Magnum before the hallways turn back towards the center of the map. One direction leads you to the lower portion of the dark room, while the other direction will bring you out at the room that houses the ramp that holds the overshield.

To get off the elevator and turn around would lead you past a flag spawn point and then to a T-junction with the Energy Sword right in front of you. This weapon is under the drainage grate mentioned earlier. To turn one direction at the Energy Sword leads you to the dark room, while turning the other direction leads you to the small room containing the ramp and overshield.

The dark room has a door on the side opposite the hallway with the Magnums; it leads to the main circular room and also to a small section behind it where the flag spawn point is. This back section has staircases on either end that lead to a catwalk section that can be used to view the center, overshield, and dark rooms. This catwalk winds around above the perimeter of the center room and ends up back at the elevator at the top of the stone steps (a favorite for the custom Juggernaut game type "Hide and Go Seek").

Capture the Flag
On Ivory Tower the only type of Capture the Flag is One Flag CTF Fast. In this game the team on defense defends the flag that is found in the small section behind the center room. The team on offense starts at the bottom of the elevator near the Energy Sword. There is often a race between the player on offense to grab the Sniper Rifle at the top of the elevator and the player on defense to grab the Rocket Launcher in the alley off of the main room. Both of these weapons are critical to being successful on both offense and defense. Offensive strategies involve either taking the flag up the middle through the main room and moving little by little with each life or making a dash for the lower portion of the map by way of the Energy Sword hallway. Both are equally successful.

Assault
On Ivory Tower the only type of Assault game is Rapid Assault. In this game type offense and defense spawn in the same locations as Capture the Flag. For offense it works best if the bomb carrier grabs the overshield. This will ensure that he is able to make it to one of the bomb-arming points (each is at the base of the staircases in the back section behind the main room). Even if the bomb carrier dies, as long as the bomb is dropped in the arming circle the team has a good chance of winning. Because Sticky Arming is enabled in Rapid Assault a team can continue to drop off the catwalk and pick up the bomb and arm it little by little until it is complete. To thwart this strategy a defense must attempt to kill the offensive player before they are able to pick the bomb up or they must use a Rocket Launcher and grenades to cause the bomb to fly out of the arming circle.

Hard to hear, but if you go by the steel door behind the elevators and turn your sound up pretty loud, you should hear the Siege of Madrigal from Bungie's older series Myth. Hitting the gate has no major effects, and this may take a good amount of time. You can also hear banging (Which is due to the forked lifts), rattling, and shaking sounds. The owners name is very similar to the composer for the Halo series, Martin O'Donnell. A sound or song is heard about every 10 minutes.

Melee the first player, and walk right. This will break the barrier and send you down below the level. NOTE: This can be done on any ramp with a nearby ledge on any map; the ramp must be thin though. Also if you have at least 3 people and get 2 people outside the map you can Butterfly/Sword Climb on top of the map. There is more to do and see on top of the map than in the place you first get out. On occasion, you fall through the white rapids when killed, breaking the barrier. 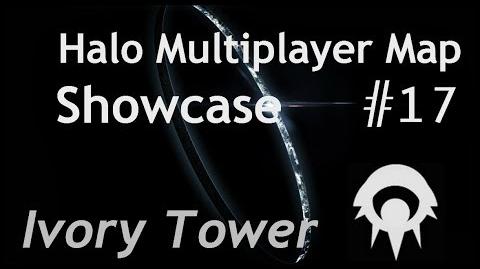