Commanding officer of the UNSC Spirit of Fire.

“Our war is gone. The lives we had are gone. The worlds we knew have moved on. And now, all that we may have left are those standing beside us and the duty that defines us – battle after battle, fighting side-by-side together.”
— Cutter to Isabel, 2559

Captain James Gregory Cutter (SN: 01730-58392-JC) is a senior officer in the UNSC Navy, serving as an officer during the Insurrection and early into Human-Covenant war.[2] He would later serve as the commanding officer of the modified colony ship, the UNSC Spirit of Fire.[3]

He appears as one of the six leaders in Halo Wars[4] and Halo Wars 2. [citation needed]

Before joining the UNSC, Cutter earned respect for standing up to terrorists in the Epsilon Indi system. Over time, he became the captain of the Spirit of Fire, and is known to walk the ship at night to check on the crew. He was so well respected that coffee houses gave him free coffee beans to take with him on long trips.[5]

James Cutter entered the UNSC School of the North Star on September 15, 2500, where he studied astro-navigation and political science. He was then sent to the Officer Candidate School on June 19, 2504 where he was taught in Command and Navigation. There, he entered naval service as a Lieutenant and Junior Navigation Officer on the UNSC Brilliant Shores on November 16, 2507. He was later transferred to the UNSC Final Summit on January 9, 2514, where he became a Navigation Officer.

Before the Harvest campaign, Cutter was offered command of the Marathon-class heavy cruiser, the UNSC Prophecy, though he turned it down, which may have saved his life.[6]

With the outbreak of war with the Covenant, Cutter was handpicked by Admiral Preston Cole to command the Spirit of Fire in her new role as center of repair, supply, and forward deployment operations for Battlegroup D. Cutter participated in the Harvest Campaign in 2531.[3] He developed a close relationship with the ship's AI, Serina, but was suspicious as to the presence of Professor Ellen Anders, suspecting that there was more to her than met the eye.[7] After making a log on the "five years of hell" that led to the reclamation of the planet,[8] Cutter and his ship still remained within the system. Cutter believed that although Harvest had been reclaimed by the UNSC, it was unlikely that the Covenant would simply back down. His belief was vindicated in a sense, considering that Sergeant John Forge alerted Cutter that the Covenant had uncovered something in the planet's northern polar region, with Professor Anders giving further proof of this claim. Cutter thus ordered that Alpha Base be brought online and the site be taken.[9] Upon discovery of the Forerunner starmap beneath Harvest, Anders was convinced that the map pointed to the human colony world of Arcadia, and managed to convince Cutter to set course for the planet. In the aftermath of the Harvest 'field trip', Cutter's level of trust towards Anders increased, impressed by the bravery she'd demonstrated down on the planet. This may have been a deciding factor for Cutter's decision to plot a course to Arcadia.[7]

Upon arrival at Arcadia on February 9th, 2531, Serina reported to Cutter that the colony had come under attack by the Covenant prior to their arrival, and was in the wake of a full invasion. Cutter ordered forces down onto the planet to evacuate civilian population centers. After evacuating Pirth City, Cutter was informed of a Covenant energy dome on the surface of the planet, protecting Covenant forces searching for Forerunner artifacts and concealing their activities. Cutter ordered Anders down to the surface with Forge and UNSC forces for protection in order to deactivate the energy dome using plasma-based Rhino artillery tanks. After clearing out Covenant forces under the dome, Anders was captured by Arbiter Ripa 'Moramee and brought aboard a Covenant ship. Forge was in strong favor of rescuing Anders, with Jerome-092 referring to Anders capture as a "significant security breach," suggesting that the Covenant ship be destroyed. Cutter made the decision to pursue the Covenant ship, tracking Anders' signal.

Following the Covenant ship where Anders was being held captive brought the Spirit of Fire to a Forerunner Shield World installation, Shield 0459, where Anders' signal was found emitting from the planet's surface. Cutter sent Forge down to the surface, where a parasitic lifeform was found to have infested the installation. After much battle with Covenant forces on the interior of the Shield World, Anders was eventually found by Sergeant Forge after she had escaped.[10] She had gained knowledge of a fleet of Forerunner warships that the Covenant planned to use against humanity. Anders soon devised a plan to use the Spirit of Fire's FTL reactor to cause the artificial sun inside the Shield World to go supernova, to destroy the ships before the Covenant could make use of them.[11] Forge and Spartan Red Team defeated 'Moramee and his guards, although the reactor core was damaged. Forge stayed behind to manually overload the reactor. Cutter, using a dangerous slingshot maneuver around the expanding sun, managed to escape the explosion of the sun, after which the Spirit of Fire began a long journey home. Two weeks later, Cutter forced Anders into cryo-stasis, stating that she "got all of [them] out of there alive." As the pod closed, Anders reminded the captain that not everyone had survived.[12] Before going to his own pod, Cutter paused at Forge's empty pod to pay his respects to the sacrifice of not just Forge, but everyone who died in battle.

In 2558, UNSC Infinity was dispatched to rescue UNSC Spirit of Fire after it was discovered in Jul 'Mdama's Covenant controlled space being threatened by the Sangheili terrorist Vata 'Gajat. However, this proved to be a trick to lure the Infinity into a trap, and the Spirit of Fire was nowhere to be found. In reality, it was still drifting through space elsewhere.

In 2559, Cutter, along with the rest of the crew, was awoken from cryostasis when the Spirit of Fire arrived at the Ark. He listened to Serina's final message, as due to her long service life had begun to develop rampancy and destroyed herself, in which she described that it was an honor to serve with him. He briefly mourned Serina, along with Anders, before resuming command of the ship.

Unaware of the Ark or the situation in general, Cutter sent Red Team to investigate a UNSC signal coming from the surface. Red Team encountered the logistics AI Isabel and a powerful Brute warlord called Atriox, along with his horde of pirates, mercenaries, and ex-covenant warriors known as the Banished. Jerome calls for Archer Missile strikes to cover their retreat, which Cutter authorizes. Jerome then brought Isabel to Cutter. While at first despondent and hesitant to communicate due to trauma, she brought Cutter up to date and explained the Banished threat. She implored him to flee, but Cutter realized that Spirit of Fire is all that stands between humanity and Atriox. He gave a stirring speech that roused the crew and Isabel to join him in one last battle.

Cutter commanded much of the campaign against Atriox, providing fire support from the Spirit of Fire with Archer Missiles as well as deploying troops. He cooly commanded the ship in combat when the Banished carrier Enduring Conviction engaged the UNSC command ship, although the Spirit of Fire had no chance in the vastly superior warship.

Once Anders departed aboard a new Halo Ring produced by the Ark, Cutter was left to hold off the Banished as long as he could while the Professor summoned help.

Cutter is known to have a wife, Mary Cutter, and a daughter on Reach.[13] He also had an illegitimate son, Daniel Clayton with a woman on Tribute.[14]

Captain Cutter serves as a Leader in Halo Wars and Halo Wars 2. His special abilities include:

Early model of Cutter that resembles Palpatine from Star Wars.

A reference concept sheet of Cutter. 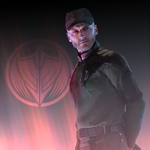 Back of Cutter's Leader Card. 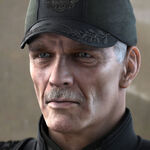 A close-up of Cutter as he appears in Halo Wars.
Add a photo to this gallery

Retrieved from "https://halo.fandom.com/wiki/James_Cutter?oldid=1814154"
Community content is available under CC-BY-SA unless otherwise noted.