Jasman Toys is a company that designs and produces toys for children of all ages. Their products range from remote controlled helicopters, electronic dinosaurs and shooting toys. During the production of Halo 3, the company was given a contract to produce replica weapons from Halo 3 in order to further promote the game.[1]

The Halo 3 Laser Tag replicas made its first appearance at the 2007 ComiCon where the Plasma Rifle and Plasma Pistol was put on display at the Tor booth. All replicas will retain some of its unique feature similar to those in the actual game; the Plasma Rifle and Plasma Pistol, when fired continuously, will overheat quickly and their side vents will pop out. They will still have the realistic sound effects from the game. The replicas also feature a reload button when they are depleted of ammunition. 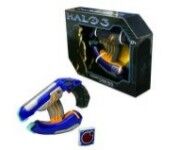 Plasma Pistol in its packaging.

Plasma Rifle in its packaging.