The Brute Bodyguard is a Brute specialty rank.[1]

Bodyguards are responsible for the protection of their pack's Chieftain as well as for the enforcement of tribal law and/or military law. Whenever there is a Chieftain nearby, you will encounter Brute Bodyguards, which look very similar to Captains. Brute Chieftains are typically accompanied by 2 to 4 Brute Bodyguards. Bodyguard Brutes are also seen protecting the High Prophet of Truth on the level The Covenant.

They are likely the replacement for the Honor Guard being that Tartarus also had Honor Guard protection. Brute bodyguards seem to favor Covenant weapons such as the Plasma Rifle and Carbine rather than their own native technology, but they have been seen wielding the powerful and deadly Brute Shot and the Mauler. They come in two variants: a more common, silver-blue[2] (with red under-armor) variant, and a less common, silver armored (with red under-armor) variant. Whether these variants signify differences in behavior, rank or strength is unknown as of yet. They are first seen in the level, Sierra 117.

Brute Bodyguards are usually seen wielding Brute Spikers, Plasma Rifles, Covenant Carbines, Maulers, and occasionally Brute Shots. Despite its resemblance to a Brute Captain's armor, a Brute Bodyguard's light, pale blue Power Armor is actually only around the same strength as a Major Brute's. On Heroic and Legendary, it only takes 1 Particle Beam Rifle or Sniper Rifle shot to destroy their Power Armor, while 2 shots are required to destroy the Power Armor of a Brute Captain of any rank. On Heroic difficulty, it takes roughly 29 assault rifle bullets to kill a Brute Bodyguard; 10 shots to drop their shield, and an additional 19 shots to kill them.

Brute Bodyguards almost always carry one piece of Equipment; a Power Drainer, Bubble Shield, or Regenerator. They seem to overwhelmingly favor the Regenerator, often using it to support their Chieftain by helping to rapidly recharge his shields.

When encountering a Brute pack that is led by a Chieftain, it is standard Brute tactics for the Brute Minors/Brute Majors to advance on the player while the Bodyguards hang back to protect the Chieftain, even going so far as to move into the player's line of fire to shield the chieftain with their bodies if he starts taking gunfire from long range. If the Chieftain retreats (such as during the final encounter in The Storm), the Bodyguards will also fall back with him while the remaining Grunts and Brutes remain behind to delay the player's advance.

Brute Bodyguards can quickly dispatch the player's shield with Plasma Rifles, and Maulers, if shields are low. Their Power Armor is highly susceptible to plasma-based weaponry, with the Plasma Rifle and the Plasma Pistol's overcharge shot greatly exemplifying this. As with other Power Armor, once disabled, its shielding will not recharge. With their helmets removed, any Headshot will then quickly eliminate the Bodyguard. A single headshot from the Particle Beam Rifle or Sniper Rifle will kill a fully armored Brute Bodyguard, even on Legendary difficulty.

The Brute Captain Ultras and the typical Brute Bodyguard, look almost exactly the same (especially in dim lighting), but there are in fact slight differences in their Power Armor color and power. The Brute Captain Regulars have a violet tinge to the armor, but the Bodyguards have a more indigo color and their under-armor and garments are light crimson; however, in the heat of combat it's extremely difficult to differentiate between the two ranks. They most likely replace the Brute Honor Guards, from Halo 2. 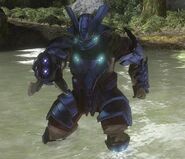 A pair of Brute Bodyguards. 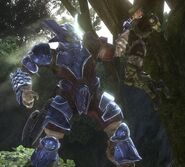 Retrieved from "https://halo.fandom.com/wiki/Jiralhanae_Bodyguard?oldid=1791496"
Community content is available under CC-BY-SA unless otherwise noted.