The Jiralhanae Captain Major is a Jiralhanae rank whose members wear golden Power Armor. They are the second highest ranking Captain though they are seen much more commonly than the other two. They are seen in the Campaign of Halo 3 and often lead lower ranking Jiralhanae, as well as lances of Kig-Yar and Unggoy.

Captain Majors are much tougher than your standard Brutes; their armor can take more damage than others, and with the Mythic or Tilt skulls activated, they can survive a Plasma Grenade or Spike Grenade stick (on higher difficulties). On higher difficulties, it takes two Sniper Rifle or Beam Rifle shots to destroy their Power Armor and a third shot to the torso or head to kill them. In Halo Reach, on Legendary, it takes 4-5 shots with a Shotgun to kill a Captain Major. In terms of strength, battlefield adaptability and rarity, Captain Majors are similar to Sangheili Ultras. Apparently they increase the morale of their troops they are leading (if one is killed, all nearby Unggoy will flee). They usually use Brute Shots, and when under attack will deploy their piece of equipment, usually a Bubble Shield. In Halo 3 they can be seen commanding troops on the Scarab walkers.

Captain Majors are the only Jiralhanae to wear bright gold armor, and in Halo: Reach, have red markings and less armor on their bottom half, which isn't gold, but steel, making them easily recognizable. Their most often used weapon is a Brute Shot, but they can often use other weapons as well. They are most commonly found on the Legendary difficulty. The Captain Major is the first Jiralhanae encountered in Halo 3.

Captain Majors, are most commonly seen sending Kig-Yar, Unggoy, or lower-ranked Jiralhanae, into the heat of battle, as they fire ceaselessly from long range with whatever they are armed with, usually a Brute Shot.

Players facing a Brute Captain Major are advised to grenade the subordinates to death, then either snipe or melee the Captain Major to death. Using long range weapons gives the player a chance to dodge the ceaseless fire given out by the Captain Major, and meleeing will cause the Brute to pause long enough for the player to kill him with melee attacks.

Captain Majors often employ the use of a Flare, Deployable cover, or Bubble Shield. When they deploys a Bubble shield, the player is advised to seek close range weapons such as a shotgun and assault the bubble shield. Do this by running as close to them as possible so that they do not use their weapons against you. Instead they will try to melee you. If one is quick enough, they can dodge their melee and shoot or melee them in the back or side. When the Captain Major deploys a flare, the player is advised to either take cover until the Flare is burnt out, or to use the flare to their advantage, using their motion sensor to seek out enemies who are likewise blinded. When they deploy a Deployable Cover, although rarely, the player is advised to use grenades, or long to short range weaponry to take it out. 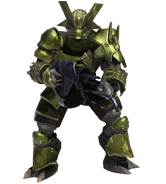 Gold armour of a Captain Major

Captain Major in the jungles of Kenya.

Retrieved from "https://halo.fandom.com/wiki/Jiralhanae_Captain_Major?oldid=1791498"
Community content is available under CC-BY-SA unless otherwise noted.