The Jiralhanae Combat Knife was a close quarter combat weapon issued to the Jiralhanae.  Chieftain Lepidus used his combat knife to torture Colonel James Ackerson into giving up information on the Key of Osanalan.[1] When the Key proved to be a hoax designed to protect Colonel Ackerson's brother, Lepidus used the knife to behead the prisoner.[2] 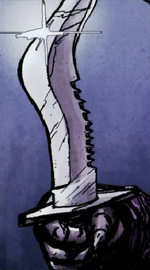 The Combat knife being brandished.