This article is a stub. You can help Halo Alpha by expanding it.

“In recognition of this, his tireless diligence, we honor him as the vigilant eye of Noble. ”
— The Monument to Noble Team

Jun-A266 (pronounced "June") is a SPARTAN-III commando of the UNSC Naval Special Warfare Command, attached to Special Warfare Group Three. He fought as a part of Noble Team during the Fall of Reach in 2552. Jun was also one of the two founders of the SPARTAN-IV Program.

Jun was born in the year 2524 in Tyumen, New Harmony. He was conscripted as a part of Alpha Company.

Jun served with Noble Team as Noble Three during the Fall of Reach in 2552. Jun was Noble Team's marksman[2] and recon specialist, pointing out targets for the rest of Noble to hit and providing overwatch from a Falcon. On Reach, Jun was last seen boarding a Pelican to escort Dr. Halsey away from Sword Base to CASTLE Base under orders from Carter-A259. When Team Alpha made their way to CASTLE base the next day to regroup with Team Delta, Jun was nowhere to be found.[3]

In January of 2553, Jun hand-picked Sarah Palmer, who was an ODST at the time, to become one of the first candidates for the SPARTAN-IV program.[4][5] Jun and Musa-096 began to train Palmer and the other new Spartans they recruited.

While Jun and Lasky were giving the new Spartans a tour of UNSC Infinity, an Insurrectionist team led by Ilsa Zane took Infinity's captain and bridge crew captive. In order to retake the ship, Palmer convinced Jun to allow her and the other SPARTAN-IV recruits to receive their armor despite that they hadn't yet been cleared.[6]

While Palmer and Davis climbed Infinity's outer hull to the Bridge, Jun, Lasky, and the other Spartans were engaged by a strike team of Insurrectionists. They held off the strike team long enough to seal the hallway doors, neutralizing the threat. When they finally arrived at the bridge, they found that Palmer and Davis had already neutralized Zane and secured the bridge.[7]

“I kill the enemy, but do not hate them.”
— When previewing Jun's voice in the Armory in Halo: Reach

Jun is regarded as "rock solid under pressure" and a thoughtful and taciturn soldier. He is also noted as being "chatty," sometimes to the degree his chattiness is considered being against noise discipline protocols. He has shown symptoms of post-traumatic stress in the past. In a psychiatric evaluation on 15/12/2549, he was noted as having "an unhealthy emotional detachment in regards to the consequences of his actions." Colonel Urban Holland, who later evaluated the members of Noble Team, disagreed with this assertion, commenting that Jun is a rationalist and a SPARTAN.[8]

Jun wears a Scout helmet with an HU/RS upgrade and a Tactical/Patrol chest piece. He uses the Sniper shoulders with his combat knife on his right shoulder and spare sniper rifle rounds are on his left shoulder. He has a Tactical UGPS on his left forearm. His leg attachments consist of a Softcase on his left thigh and FJ/PARA knee guards. His weapons of choice are the Sniper Rifle System 99 Anti-Matériel and the M392 Designated Marksman Rifle.

The Firefight profile image of Jun.

Jun on a Falcon.

Another view of Jun.

Jun in "The Package."

Jun grabbing his sniper rifle and about to board a falcon.

Jun in a suit.

Jun and SPARTAN-IVs in a firefight. 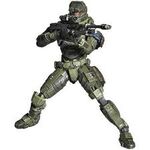 Another view of the Jun Figure. 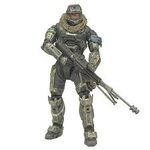 Another action figure of Jun. 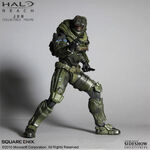 Another picture of Jun action figure