The Katana is a special Armor Permutation in Halo 3 and is unlockable by earning 49 out of 79 achievements or 1000 gamerpoints.[1]

The Katana consists of a normal Hayabusa body with a Katana sword affixed to the back, with a white attachment, possibly magnetized.[1] The sheath of the Katana is grey and the handle is a reddish brown color. The Katana does not affect gameplay when equipped. 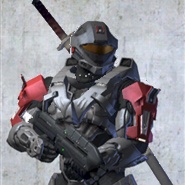 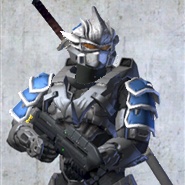