Were you looking for the Insurrectionist ship, the Kestrel, mentioned in Halo: The Cole Protocol or the AV-30 "Kestrel" Light Assault VTOL seen in Halo: Spartan Strike? 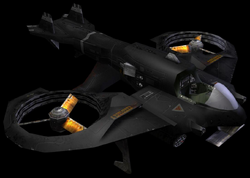 The Kestrel is a UNSC aircraft seen in the Halo 2 Collector's Edition disc that was cut from the game.

Kestrel (deleted aircraft) is part of the Deleted Material cut from the Halo games.

While developing the Halo games, Bungie, 343 Industries and Ensemble Studios have had to cut some content, such as vehicles, gameplay, and story elements, from the final products. Much of this content has been confirmed by videos and commentary in special edition DVDs, interviews with developers, and released concept art.

Concept art of the Kestrel.

Concept art of the Kestrel.

Concept art of the Kestrel.
Add a photo to this gallery
Retrieved from "https://halo.fandom.com/wiki/Kestrel_(deleted_aircraft)?oldid=1808636"
Community content is available under CC-BY-SA unless otherwise noted.