Were you looking for the Sangheili Point Defence Gauntlet?

Buck: "Got a little Jackal problem."
Dare: "An overcharged Plasma Pistol shot will neutralize their shield."
― Edward Buck and Veronica Dare, during the Battle of Mombasa 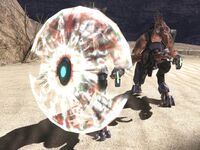 Worn on the forearm of the user, the gauntlet creates a plasma barrier contained within a magnetic field, much like the Sangheili energy sword. This shield deflects and absorbs small arms weaponry to an extent; UNSC ballistic weapons and the Needler simply bounce off the plasma barrier, whereas the Covenant's plasma-based weaponry is absorbed by the plasma barrier, eventually collapsing it.

Heavier weaponry, such as the Fuel Rod Gun, M19/M41 rocket launchers, and the gauss cannon, are considerably effective against the gauntlet's plasma barrier. Alternatively, explosions and extreme force from grenades and melee attacks will collapse the plasma barrier and likely kill the wearer in the process. The shield has a small open section on one side allowing the use of small arms. This opening, however, creates a disadvantage for the user as it exposes said weapon and any body parts behind it to enemy fire.

The shield of the point defense gauntlet reflects its current charge by changing color gradually from its original color to red before it deactivates completely.

There are several models of point defense gauntlets. The most common one is mounted on a wrist strap with an oval emitter, and has two cutaways for firing. A newer, more advanced model was first seen during the Battle of Reach, which had only one cutaway and was emitted by a full-arm gauntlet. A third variant has been seen in use by T'vaoan Murmillos.

Changes from Halo 3 and Halo 3: ODST to Halo: Reach

A Kig-Yar with a deactivated point defense gauntlet.

A Kig-Yar point defense gauntlet collapsing when exposed to a Power Drain.

A render of two Jackals with their point defense gauntlets in Halo Wars.

A Kig-Yar with a point defense gauntlet as seen in Halo 4.