Were you looking for Kikowani Station, the location?

Kikowani Station is the eighth campaign level of Halo 3: ODST. In this level, the player takes control of Buck. Chronologically, this is the last flashback mission of the game. It's also the last time you play as any of the other squad members other than the Rookie.[1]

Completing this level on Normal or above unlocks the Kikowani Station achievement[2] and 30 Gamerscore.

Five hours after the drop, following the skirmish atop NMPD headquarters, the squad carries a wounded Romeo toward Kikowani Station. Buck has a plan to escape the city through the MagLev Train tunnels leading to Old Mombasa, only to realize that the area has been flooded by water. Out of options, Buck administers biofoam to Romeo's wound and, in a risky move, decides to hijack a Phantom and fly it out of the city. Buck and Mickey make their way through heavy Covenant defenses on a station platform, where Mickey manages to steal a Phantom.

While Dutch and Romeo man its turrets, Buck pilots a Banshee and escorts the Phantom though Covenant lines, which include Banshees, Shades, and Anti-Air Wraiths. After surviving close-quarters aerial dogfights and a few foot skirmishes through tunnels, between high-rises, and over flooded areas of the city, the squad encounters and defeats a Scarab. Clear of the city, Buck ditches his Banshee mid-air and boards the Phantom to rejoin his men. A comment by Romeo allows Buck to realize where Dare is, and he abruptly orders Mickey to turn around the ship so he can go find her.[1]

Cutscene opens as the Squad approaches the entrance to Kikowani Station. Buck is helping Romeo to walk, while Mickey jumps the rail to scout ahead.

Romeo starts to have difficulty breathing and protests.

Buck puts Romeo against a wall.

Dutch kneels down, Buck looks through Dutch's pack for a medkit.

Romeo pulls out the canister.

A Phantom suddenly flies overhead, carrying some Engineers underneath it.

Dutch reaches inside a ticket booth and hits the button to close the security shutter. The view switches to a Superintendent's camera. It watches the Phantom flies away, then shows a confused face at the closing shutter.

The shutter stops just before being fully closed. The view switches back to the ODSTs, Buck offers Romeo a hand up and Romeo places the empty canister in Buck's hand. Romeo gets up, and Buck casually tosses the Canister away, where it rolls under the door for the Rookie to find later.

Buck, Dutch and Romeo head down the stairs into the tunnel, the view switches to another Superintendent camera, this one in the tunnel; it shows the tunnels have been flooded. The camera than starts to zoom in on the squad, the avatar showing a happy face. The view switches back to them, as Buck looks around.

The camera then shows two trains, one apparently damaged, before returning to the squad. Buck looks up.

They watch a Phantom pass by, then the view switches to Buck's point of view.

Buck and Mickey advance, engaging the Covenant troops dropped off by the Phantom and another that lands soon after, also dropping off some Huragok. The second Phantom leaves after it drops off it's troops, but the first stays.

Once the area is clear, the two of them advance towards the first Phantom.

Mickey goes up the Phantom's lift, soon SMG shots are heard as Mickey takes out the pilots.

Buck finds a Banshee while Mickey goes and picks up Dutch and Romeo.

If Buck flies upward, he can see CCS-Class Battlecruisers flying around a burning crater.

The squad moves forward, being engaged by Covenant from nearby platforms and balconies. After they clear the area the door opens and a pair of banshees fly out.

The squad quickly defeats them and heads into the tunnel, engaging more Covenant forces including a tower, and a Wraith.

The squad destroys the Recharge Station.

The squad approaches the door, but it doesn't open.

If the player hesitates, or engages the newly arrived squad of Banshees:

Buck lands near the door and opens it manually.

Inside the next section, a large squad of Grunts are waiting, but, are easily destroyed by the Banshee. Farther in, another Phantom is dropping more Huragok into another Recharge station, but Buck fires on the station blowing it up, causing the Huragok still on the Phantom to explode, damaging the dropship. The Phantom then tries to take off towards the next area but is easily destroyed.

In the next area there are several more Recharge stations, and a Phantom drops off an AA Wraith. Heavily armed Grunts and Brutes also fire on them from a balcony. The squad soon defeats the present Covenant defenses. The door to the next area, like before, is locked.

Buck hits the override but only the smaller doors open, the larger section remains closed.

Buck heads into the tunnel, and is engaged by multiple enemy forces, including Brute Stalkers and a Brute Chieftain, he soon defeats them.

Buck soon finds another room, and another switch, which opens both doors.

Buck makes his way back to his Banshee, heads to the other end of the tunnel and spots a Scarab near the next door.

Buck fires at one of the Scarab's legs, immobilizing it.

The squad heads into the last tunnel, which is covered with Recharge Stations.

The Phantom advances. Dutch and Romeo fires on the Recharge Stations, causing a large explosion.

The explosion from the Recharge Stations reaches outside, as Buck and the others burst through. Buck flies up to the Phantom, exits the Banshee, and is picked up by the grav lift. The Banshee falls into the water.

This triggers something in Buck's memory.

Buck suddenly realizes where Dare could be.

Mickey turns the Phantom around and they head back into the city. 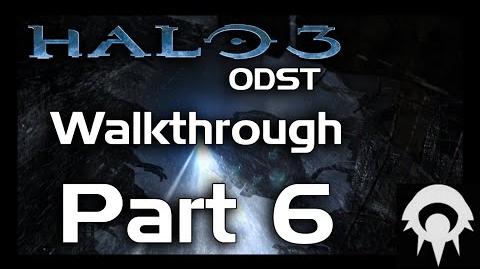 Retrieved from "https://halo.fandom.com/wiki/Kikowani_Station_(level)?oldid=1792985"
Community content is available under CC-BY-SA unless otherwise noted.