The Killimanjaro medal, also called Killamanjaro in Halo: Spartan Assault, is awarded for killing 7 opponents within four seconds (4.5 seconds for Halo 4) of each other.

If you were to get one barely under the time requirements, you would have to get 7 kills in just under half a minute. It is available in all Multiplayer gametypes, and is assumed to have a Bungie difficulty rating of 10 out of 10 since the Killtrocity medal has a difficulty rating of 9 (out of 10).

It is represented by a platinum circle with 7 yellow stars.

This medal is seen very rarely, and most often in custom gametypes, or in Grifball. When someone gets this medal, the announcer will shout "Killamanjaro!" to the player that received this medal. The name is a play on the African mountain, Kilimanjaro.

It is easy to get on Halo 3: ODST's Firefight map Lost Platoon. As enemies try to attack the player's Warthog, it is relatively simple to gun them down. The player can also take a warthog to the center structure, where Wraiths are unable to easily reach the player.

The Killimanjaro medal from Halo 2 Vista, on the right. 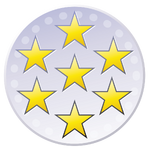 The medal in Halo: Reach.