The Killionaire medal is represented as a black hexagon with 10 platinum/silver stars. It is awarded for getting a 10th kill within 4 seconds of your 9th.

Unlike Halo 2's "Killimanjaro" medal, this does not repeat if you kill 10+ opponents within four seconds of the previous kill, except in Campaign Scoring. This is the hardest multi-kill medal to achieve, as there are no multi-kill medals beyond this point. Also, it should be noted that you will most likely get the Killing Frenzy medal after earning this. The maximum time for getting this medal is 36 seconds, as you have a maximum of four seconds between each kill. In Halo 4 it is 40.5 seconds and 4.5 seconds, respectively.

In Firefight mode, getting multi-kill medals get progressively more points, the pinnacle being the Killionaire. Using these methods to get the medal help get more points, and as a result can help if trying to get the achievement for racking up 200,000 points on that particular level. 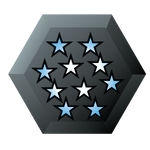 The medal in Halo 3

The medal as it appears in the Halo: Reach Beta

The medal in Halo: Reach.
Add a photo to this gallery

Retrieved from "https://halo.fandom.com/wiki/Killionaire_medal?oldid=1811840"
Community content is available under CC-BY-SA unless otherwise noted.