Completing the level on normal or higher unlocks Mickey for use in Firefight as well as the Kizingo Boulevard achievement.[1]

90 minutes after the drop, Mickey finds himself in the middle of a fierce battle between the Covenant and the UNSC. He commandeers a Scorpion Tank and fights his way along the Kizingo Boulevard with the aid of other UNSC Marines. Eventually, he and Dutch meet up at a rally point at the entrance to the ONI Alpha Site, where they defend the area against waves of Covenant attackers. After the battle, Mickey proposes that they hole up and wait for backup, before an NMPD officer comes asking if they know how to use explosives. Mickey and Dutch decide to follow the officer into the ONI facility.[2]

{Mickey is seen running down a street. Just as he reaches a junction, a Scorpion Tank is seen backing up at high speed, followed by a few Marines.}

Mickey walks out into the street, confused, just before a Wraith tank comes into view. It fires a plasma mortar as its gunner fires at Mickey, who runs for cover. The mortar makes contact with ground where Mickey was a moment ago. The explosion from the mortar also makes a barrel hit him in the head.

Mickey gets back up.

As the camera cuts to a first-person viewpoint from Mickey's helmet, the Marines take cover under a building.

The Scorpion fires a shell right past Mickey's ear.

As Mickey makes his way toward the tank a group of Covenant engage them.

If the player doesn't make their way to the tank the Marines will start yelling at them.

If Mickey still doesn't get in the tank.

As Mickey reaches the tank a Phantom lands down the road, and drops off a Ghost and a Wraith.

With the help of the tank Covenant forces in the area are defeated.

The tank makes its way through the streets, engaging more Covenant troops, soon coming to a plaza.

After eliminating the Covenant in the area, Mickey makes contact with the new squad of Marines.

The Marines make their way through the streets, engaging heavy Covenant forces in another plaza, soon they are defeated as well.

As Mickey approaches the door.

Mickey drives onto the boulevard, and sees two Gauss Turrets over looking the street. The Turret that the Rookie finds has already been disabled.

The Marine starts to open fire. The Wraith shells the turret in return, destroying it.

Mickey and the Marines engage the Covenant in the area and soon defeat them, Mickey drives towards Dutch's position.

A Wraith suddenly drives out from behind the building.

Mickey quickly destroys the tank, heads up the street, and leaves the tank, because of a couple of barricades.

As Mickey reaches Dutch the door opens and Covenant troops pour out.

Together Mickey and Dutch defeat the Covenant in the area.

A group of Jackals head over one of the bridges.

After most of the Covenant troops are killed.

After a hard fought battle, the Covenant troops are defeated and Mickey destroys the Wraith.

Once the player arrives at Dutch's position the level ends.

View switches to a Superintendent camera, whose avatar shows a happy face at the sight of ODSTs.

The Superintendent's avatar shows an angry face at Mickey's vote.

The view switches back to the ODSTs, who aim their guns at the door as it opens, an NMPD officer emerges from behind it.

The camera pans up to show the Naval Intelligence sign. 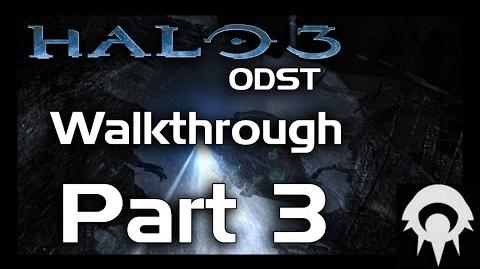 Concept of the level

A screenshot of the level

A screenshot of the level