Labyrinth is a large 2v2 map in Halo Wars. It looks like a huge square, with building sites situated at regular intervals in the map. Large Forerunner walls also take up parts of this map. The areas of building sites slightly resembles a grid, with sites in some squares. The picture shown on the right is the centre bridge of the map, where most battles are fought.

A very unique feature of this map are Forerunner Protector Sentinels, which can be purchased by players and attached to squads. There are three unique variants, which can attack enemies, heal units and project protective shields. The map also features several Forerunner Forts, which take the place of Rebel Bases. These bases are protected by powerful Sentinels, Super Sentinels, and Laser Turrets. The fact that the Sentinels are flying units, means that these bases are a bit more difficult to assault early on. You want to build up strong defenses on all sides because your enemy will flank you.[1] 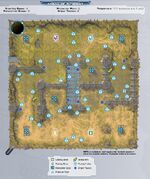 A strategic map of Labyrinth.

One Fortress and three Citadels on Labyrinth.

An early image of Labyrinth.
Add a photo to this gallery

Retrieved from "https://halo.fandom.com/wiki/Labyrinth?oldid=1791739"
Community content is available under CC-BY-SA unless otherwise noted.