The area of which it is a simulation was used as an evacuation site, during the Covenant attack in Casbah, where a single SPARTAN fireteam protected the civilian evacuation transports.[1]

Landfall: A shining city under attack…

The world of Tribute is now a graveyard, but its capital was once a bright beacon of commerce among the inner colonies. Fight in the corridors and courtyards of Casbah’s port authority buildings, but don’t stand still too long. Perfect for Infinity Slayer, this small to midsize asymmetrical map offers interiors with sparse cover, which encourages close-range combat, while the exteriors offer long lines of sight to stalk your opponents. Awesome jump routes let players spring around the outside of the map, incidentally offering a perfect view of the city as it is razed by the Covenant’s brutal assault.[3]

These are the weapons/equipment that individually spawn through initial drops or through randomly timed drops:

While never spawned in on Matchmaking, there are two spawnable vehicles in Forge on Landfall: the Ghost and Mongoose. 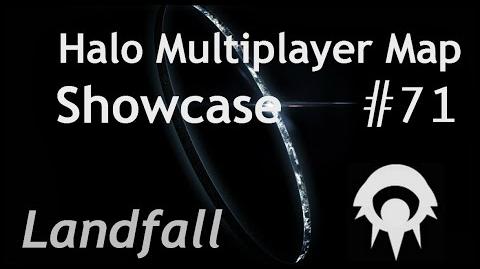 Landfall from another view

The City being glassed by the Covenant in the background.

The Spade can be found on this map.