Were you also looking for the Brute Land Mine or the Trip Mine from Halo 3?

A Landmine is an explosive that appears in Halo: Reach, Halo 4, and Halo 2: Anniversary. While Landmines may be placed in Forge Mode, they also appear in matchmaking when the Race gametype is voted for. They also appear in Breakpoint.[1] It functions similar to that of the trip mine; a usable piece of equipment in Halo 3. While the flashing red light atop the mine is quite visible, it can still catch unwary drivers off guard. Many "Forgers" often turn Landmines upside down and through the ground using the "Phased" setting, making an almost invisible and effective trap. Unless custom settings are used, all vehicles will be destroyed if they are within the blast radius of the mine, in other words they are an instant kill to any vehicle with the exception of the Scorpion, which requires at least two.

The landmine, as seen at the bottom left of the screen.

The landmine is detonated.

A Mongoose drives by a landmine. 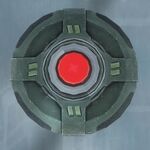