Last Resort[1] is a Halo 3 multiplayer map, being a remake of the Halo 2 map, Zanzibar. It remains very true to the original, but contains many changes and additions, such as a second tunnel for vehicles to enter the main base.

Last Resort is extremely similar to Zanzibar. At one end of the map is a generator station, a larger more expanded version of the one featured in Zanzibar, offering more defensible positions and points of digress. The "prison bars" gate that once blocked the vulnerable right flank of the station is now replaced by three barriers, preventing vehicles from intruding and giving defenders more cover. There is, however, an internal switch to lower these barriers. The "flag room" of the station has also been maximized by a factor of three or four in terms of surface area, making it more spacious. The single generator from Halo 2 has been replace with nine generators inaccessible from within the map, but visible.

The two passages that allowed attackers at the "front door" of the station to enter have been widened and elongated. A secondary point of entrance for vehicles has been added to the far wall (perpendicular to the main gate entrance). The internal switch located in the “flag room” of the fortress also controls the gate here. This switch contains one of the more known Easter Eggs in Halo 2 and 3, the BSOD (Blue Screen of Death) is shown on the computer after it is activated.

Camp Froman, familiar to many Zanzibar players as the sniper rifle spawn, is still mid-map, but is now more accessible. There is an open room underneath Camp Froman that is accessible from four different fronts (a drop-down from above, a door under each set of stairs, and a primary door in-between the stairs). Furthermore, a second catwalk stems from the second story of the fortress to Camp Froman, which allows base defenders to reach the sniper rifle just as quickly as attackers. In Zanzibar, players could exit the fortress on the right hand side by jumping down from the windows, or walking down a dirt ramp. This alternative catwalk replaces the dirt ramp and edges along the cement wall that walls off the map, makes a perpendicular turn midway and connects to Camp Froman.

Next to Camp Froman, there are three large transformers that provide much better cover than the rocks in Zanzibar. This is an adequate fighting spot, considering the only possible places of attack are the Fortress and the Wheel. The transformers protect players from a majority of fire from the Wheel, though. The Sea Wall is not a threat, due to the protection Camp Froman offers. These large transformers presumably convert voltages from the generators in the station. While moderate cover is provided, these transformers can easily be flanked or rushed, leaving the player vulnerable to close-range enemies that can approach from the sideways passages leading from the bridge, or Sea Wall.

At the other end of the map is the beach, next to a cinematic seashore, where the Warthog, Ghost, and two Mongooses spawn. There is a large chunk of land between the fortress and the beach, which is home to the Sea Wall. Now more easily defended, the Sea Wall runs along the length of the beach as it did in Halo 2, and moves up towards the middle of the map (opposite from Camp Froman) with a path to the fortress or wind wheel. The middle tower in between the wheel and the beach is now accessible from the beach, and an archway is formed from the water to the tower.

The iconic Wind Wheel still is placed squarely between the Sea Wall and the fortress. The Energy Sword that was present in the small wheel on the center of the windmill, has now been replaced with Active camouflage. A Bubble Shield now resides where the Active camouflage was in Zanzibar, the tower to the wind wheel via the Sea Wall.

The tower on the right hand side of the Sea Wall still allows players onto the wind wheel, although now an unknown red-colored mechanism replaces the yellow-colored fusion mechanism to stabilize (drop the bridge) the pathway from the tower to the wheel. The broken pathway from the tower to the fortress has not changed much aesthetically, but has been lengthened. There are now stairs and gratings around the base of the wind wheel giving players more mobility and freedom to move around the map.

The Wind Wheel itself can be used to get up to the Spartan Laser, which replaced the Rocket launcher, and the Active camouflage. If you are at the bottom, you can ride the wind wheel's 'blades' and then walk on them when they are horizontal. If you try to drive a vehicle over the blades, it may kill you and count as a suicide.

An underside look at the wind wheel.

A vista from the beach to the towering fortress in the distance. 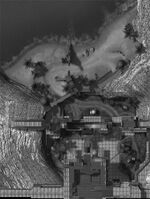 A birds-eye view of Last Resort. 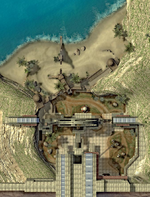 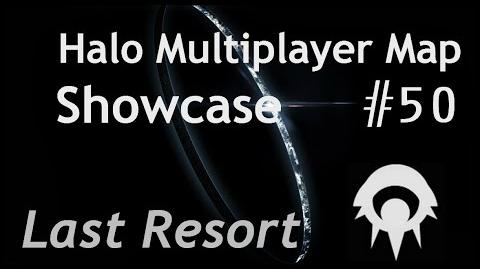 Retrieved from "https://halo.fandom.com/wiki/Last_Resort?oldid=1801759"
Community content is available under CC-BY-SA unless otherwise noted.