Were you looking for the Halo 3 ranked playlist Lone Wolves?

Lone Wolf is the eleventh and final campaign level of Halo: Reach. The level takes place after the credits and will be accessible to players when they finish the entire game. The setting of the level begins at 20:00 hours on August 30, 2552, near the ship-breaking yards at Aszod. SPARTAN-B312, left at the ship-breaking yards after the UNSC Pillar of Autumn’s escape, is left to simply survive as long as possible. After fighting off waves of Covenant forces, Noble Six eventually succumbs and is killed by a group of Sangheili warriors.[1]

Two Banshees zoom past as the camera pans down to Noble Six, standing alone on a raised platform, stranded on Reach. Phantoms start to approach the SPARTAN's position, and Six gets ready for the final battle.

Can you survive? Alone? The Covenant decided long ago to take Reach and no single man - make that no single Spartan - could stop them. You fought long and hard and gave Reach your all to achieve this point. Fight if you must, but understand that you owe Reach nothing. Your efforts will live on in the annals of history, and all of humanity will sing your praises for centuries to come. Be the Lone Wolf if you desire and fight for all you can, but you know this is not a battle you can win. It is time to say goodbye.

Waves of Covenant troops, including Sangheili, Unggoy, and eventually Wraiths attack the lone Noble Six. Aircraft from above, while initially ignoring the SPARTAN, also begin to fire on the player's position.

Noble Six holds out for as long as possible. As more damage is taken, cracks begin to appear in the SPARTAN's visor. Eventually, Six takes enough damage and the screen turns to black.

Noble Six's POV: SPARTAN-B312 is under heavy fire and hurt. There are two cracks in Six's visor. The SPARTAN's Assault Rifle is lying on the ground. The SPARTAN pulls off the damaged helmet, tosses it aside, and picks up the weapon.

Camera shifts to the discarded helmet's POV, which shows Noble Six making the final stand against the Covenant. A Sangheili Ultra charges at the SPARTAN, firing a plasma rifle. Noble Six kills it with the assault rifle. A Sangheili General attacks from behind with an energy sword. Noble Six knocks it to the ground and kills it with a pistol. Six is hit by a barrage of plasma fire from off-screen. The SPARTAN is wounded, bleeding, but manages to stay standing. Holding the Assault Rifle at the hip in the right hand and the pistol in the left, SPARTAN-B312 continues firing, killing a Sangheili Minor and Major before another Ultra knocks Six to the ground.

A Sangheili Zealot appears with an Energy Sword and prepares to kill the downed Noble Six. The SPARTAN kicks the Ultra away and knocks the Energy Sword out of the Zealot's hand. The Ultra pounces on Noble Six again. Noble Six manages to elbow the Ultra in the jaw. The Zealot draws his Energy Dagger, and finally stabs Six, killing him. The foot of a SpecOps Sangheili steps into the frame, and the tips of an Energy Sword appear.

Cut to Noble Six's shattered helmet, lying on the ground in the dust.

Scene fades in to the same location. The ground is now a grassy plain and the skies are blue. The only evidence that a battle was fought here are a piece of debris from a destroyed ship in the background and Noble Six's helmet still lying where it fell.

The camera begins slowly pulling back.

The camera has now pulled back to reveal a UNSC ship in the background to the left. The ship is a new arrival and not a wreck.

Noble Six's last stand.
Add a photo to this gallery 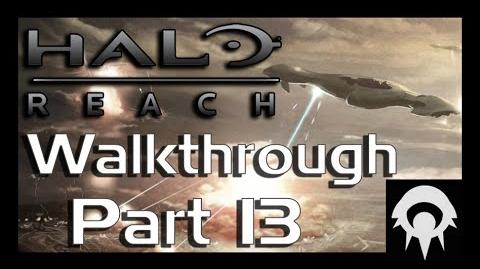 Retrieved from "https://halo.fandom.com/wiki/Lone_Wolf?oldid=1816780"
Community content is available under CC-BY-SA unless otherwise noted.