This article is about a campaign level. For other uses, see Long Night of Solace (disambiguation).

The planning and execution of Operation: UPPER CUT

Long Night of Solace[1] is the sixth campaign level of Halo: Reach.[2][3][4] This is the first and only level in the Halo series to feature playable ship-to-ship combat in space.[3]

The mission centers around delivering a slipspace "bomb" to the Super Carrier to destroy it.

The Covenant invasion of Reach is in full force, and Catherine-B320 has come up with a plan to take the fight to the enemy. Noble Team, without Emile-A239 and Jun-A266, are dropped off to a beach by a Falcon, and they must fight their way to the Sabre Program Launch/Research Range, which is under attack by Covenant ground and air forces.

Once they fight their way inside, SPARTAN-B312 and Jorge-052 enter a Sabre that is immediately launched into the planet's orbit, along with at least four other Sabres.

In space, they join the other UNSC forces in defending the station Anchor 9 and assist the UNSC Savannah in hijacking a Covenant Corvette, the Ardent Prayer. Jorge is dropped off at the station Anchor 9, as Noble Six and the remaining Sabres take out the corvette's engines just as it positions itself for a refueling track with the Covenant supercarrier Long Night of Solace. After boarding the corvette, Noble Six and his forces defeat the crew and lock the ship. Jorge arrives in a Pelican carrying a Slipspace drive, which was taken from the UNSC Savannah. It is planned that the slipspace drive would be used as an improvised bomb, to be activated inside the corvette's hangar when its close proximity of the supercarrier, in order to jump a section of the supercarrier, destroying it. However, Covenant infantry forces soon arrive to destroy the "bomb." Though the Covenant forces are successfully neutralized, retreat to the Sabres is cut off by the battle damage from the Savannah. The Pelican used as a vector for the "bomb" is damaged and unable to fly, leaving a space-jump as the only way off the Corvette. The slipspace drive's timer is also damaged, forcing Jorge to stay behind and activate it manually. Noble Six is spared when he gets shoved out of the corvette by Jorge, just before the Slipspace drive is activated. The Drive, when activated, creates a Slipspace rupture that transports Jorge, the corvette, and the central section of the supercarrier to an unknown location. For a very brief period of time, it is believed that the Covenant naval attack force at Reach was entirely neutralized by Jorge's sacrifice, but the massive Covenant Fleet of Particular Justice arrives in-system just moments later.

Screen fades into a dust cloud as a Scarab walks by.

Noble Three, Five and Six arrive at a cave, Jorge carrying a large briefcase. The Scarab can be heard firing it's main gun in the background.

Jorge takes off his helmet.

Jorge and Emile walk up to them.

Kat reaches for Emile's kukri, he stops her.

Emile allows her to take it. Jun and Noble Six walk up

Kat gives Emile back his kukri and he sheathes it

They all look at Noble Six.

Carter reluctantly takes the pad, and turns away. He starts tapping the screen.

Screen fades back to a lake.

The screen moves to show the launch facility.

A Falcon drops off Nobles One, Two, Five and Six at a beach, downrange from the facility.

Noble team moves up the beach, eventually reaching an area where a Spirit is dropping off several Covenant troops. The launch station is now in view.

After eliminating the enemy forces, Noble Team moves up the beach, as they do, a Seraph is shot down by an anti-air turret and crashes into the base.

Noble Team enters the base. A Pelican drops additional troopers to combat Covenant forces outside the gate.

Noble Team arrives at the area where the Seraph crashed earlier.

As Noble Team heads for the control room, an Army trooper is thrown into a wall. A Sangheili Officer emerges, and is quickly dealt with.

Noble Team reaches the control room, which is filled with dead troopers. As they reach the far side of the room, a bulkhead opens to reveal a Sabre.

Noble Six heads up the ramp to the Sabre's cockpit.

Six and Jorge enter the cockpit, after which the ramp detaches.

The Sabre's engines ignite, and the fighter lifts off from the facility. Soon another Sabre can be seen lifting off from another facility.

The Sabre leaves the upper atmosphere and enters low orbit.

The Sabre's booster rockets detach from the fighter. The Sabre immediately heads for Anchor 9.

While on the way to the station, several views of Reach are shown from the Sabre, one showing a hurricane. Six and Jorge soon arrive at Anchor 9.

Multiple Banshees enter the area and are immediately engaged by the Sabres. Throughout the level, you'll hear the other Sabre pilots commenting about your flying, cries for help and them defeating the enemy fighters

The Sabres quickly eliminate the Banshees.

The Seraphs prove to be more of a threat but are soon destroyed as well.

A large number of Seraphs and Banshees enter the area. The Sabres and Anchor 9 immediately engage them.

Many Banshees and Seraphs are destroyed by the combined firepower of the Sabres and Anchor 9.

After the last Phantom Gunboat is destroyed, the remaining Banshees and Seraphs flee.

Noble Six pilots the Sabre to the marked hangar.

Jorge exits the Sabre in zero-g and glides to an awaiting Pelican.

An orbital view of Reach can now be seen, as explosions from plasma bombardment occurs.

The view now changes back to Noble Six, who looks over at Jorge.

Jorge is shown readying the slipspace drive with two other Army Troopers.

The Savannah and Sabres depart from Anchor 9.

The screen fades back to the point of view of a UNSC satellite, near the Covenant corvette. Its camera zooms in on the Savannah and Sabres approaching the corvette.

Noble Six targets the main engines and destroys them.

All the corvette's escort fighters are soon destroyed.

And the Horse You Flew In On

A single Sangheili Ranger emerges from under the shield, and is quickly eliminated by Six and the troopers.

Noble Six and the troopers pass through the shield, to find that whatever Covenant without vacuum-sealed armor have died, leaving only Unggoy Ultras and more Sangheili Rangers. They are quickly dispatched.

A door opens, with two Unggoy in behind it. They are startled and easily eliminated.

Six and the troopers engage a large number of enemy troops in the hangar, including a Huragok which provides the Covenant with overshields. After they are eventually neutralized, the hangar repressurizes and normal gravity is restored.

Jorge's Pelican enters the hangar. In the background, the UNSC Savannah can be seen engaging the corvette. Jorge and several army troopers emerge from the pelican.

Noble Six heads for a door, finding ordnance and ammunition provided by the Army Troopers.

The door opens, Six and the troopers find another surprised pair of Unggoy, and several Elites which are quickly neutralized.

Noble Six heads down the corridor.

Noble Six arrives at the plasma battery, finding three Sangheili gunners. Outside the window, multiple plasma bolts can be seen impacting the fleeing frigate. Explosions blossom along the Savannah's hull.

The frigate fragments, then explodes at its mid-section.

Noble Six and the Army Troopers head for another door, leading to a winding corridor.

Noble Six and the troopers engage the bridge crew to gain control of the bridge.

Noble Six finds the NAV controls and sets a course for the supercarrier.

Noble Six arrives back at the battery, and is engaged by more Covenant.

Noble Six makes it back to the hangar, which is under heavy attack, but is soon cleared.

Six and Jorge defend the hangar from multiple waves of Covenant troops, eventually eliminating all of them.

Jorge attempts to arm the slipspace drive timer, which fails to respond.

Jorge hits the timer in frustration.

Jorge removes his helmet and just drops it to the floor, landing near his feet.

Jorge removes his dogtags and gives them to Six.

Jorge lifts Six up with one hand and carries him/her to the hangar's shield door, Six showing little resistance, view changes to Noble Six point of view, facing Jorge before him saying his final words to Six.

Jorge tosses Six out of the hangar into space. Six begins to fall back to Reach.

After Noble Six has fallen some distance, Jorge activates the repurposed slipspace drive directly under the supercarrier.

The view changes back to the camera of nav beacon RA-15, which shows a massive slipspace rift opening near the supercarrier's midsection. The corvette disappears instantaneously, and the supercarrier is severed in two as its entire midsection disappears into the slipspace rift, view changes back to Noble Six's point of view as he descended, view returns to NAV beacon RA-15 as a shockwave of ionizing radiation passes over the beacon, causing electronic interference with the camera.

A sudden rupturing noise is heard.

Dot switches to a new NAV Beacon, which shows multiple Covenant ships dropping out of slipspace above Reach. Beacon camera still cutting in and out.

More and more Covenant ships drops out of slipspace.

Screaming can be heard on the COM. The NAV beacon's camera cuts out

The screen abruptly cuts to black. 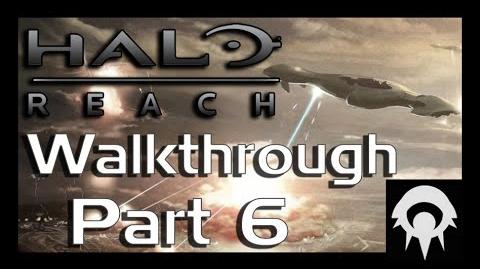 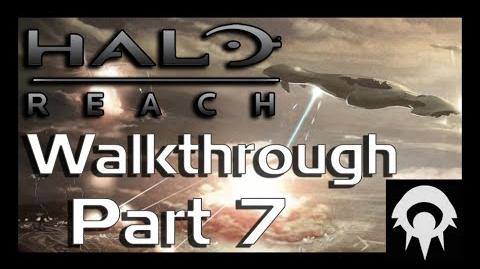 Concept art of the space section of the level.

Concept art of a Sabre launch.

Noble Team on the beach.

A Spirit dropping Covenant reinforcements as a Ghost passes SPARTAN-B312.

A Pelican with Savannah's slipspace drive.

A Sabre and UNSC Savannah attack a Covenant corvette.

When you die while flying in space, your character still falls normally.

A swarm of Banshees deploy from the Corvette