“Abandoned during the invasion of Earth, the Mombasa Quays are now bereft of commerce, but rife with danger.”
— Bungie[1]

Longshore was released in the Halo 3 Multiplayer Mythic map pack on September 22, 2009 along with Halo 3: ODST. Longshore, along with Citadel and Heretic, was released on Xbox Live Marketplace on February 2, 2010 for 800 Microsoft Points.

Longshore is a medium-large map set in a fish-processing plant on the shores of Old Mombasa. It has a distinct urban/industrial theme with rusty buildings and quays. The basis of its design includes two symmetrical sides separated by a building complex in between them, linking with a wall on one side, and the ocean on the other.

There are two bases; one is larger and more complex than the other, making asymmetrical gametypes preferred, but symmetrical gametypes still possible. Both bases feature pathways and ramps that allow easy access to the top level. The larger of the bases is much easier to defend as it is the defender's base in one-sided gametypes.

The majority of the cover on the map is provided by the various boxes and crates in the exterior areas. There are a variety of short range weapons alongside long range weapons for the cramped building interiors and the long sight lines of the exterior.

One of the carriers of the coast. Notice that the multiple Pelicans and F-99s are simple 2D art files.

The words "Suck It Fronk" as seen in the freezer.

The Halloween menu in the Fish Taco shack.

The New Years menu in the Fish Taco shack.

Bungie Day freezer 7's.
Add a photo to this gallery 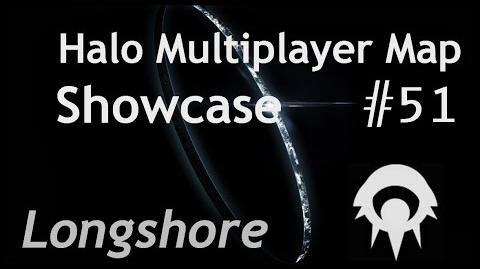 Retrieved from "https://halo.fandom.com/wiki/Longshore?oldid=1800701"
Community content is available under CC-BY-SA unless otherwise noted.