Lydus is an elder Jiralhanae Chieftain who did not leave the Oth Sonin system until he was present at the diplomatic meeting on Ealen IV in 2558, between the Sangheili and Unified Earth Government.

In March 5, 2558, Lydus and his clan were willing to discuss a peace treaty with Thel' Vadam. Lydus agreed to discuss peace negotiations with 'Vadam's proposition to have humans mediate their discussion on the remote Covenant planet Ealen IV. 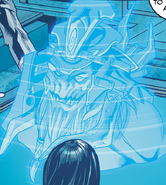 Lydus as depicted in a UNSC hologram aboard the UNSC Infinity.

The attack on the diplomatic meeting of 2558.
Add a photo to this gallery

Retrieved from "https://halo.fandom.com/wiki/Lydus?oldid=1816388"
Community content is available under CC-BY-SA unless otherwise noted.