The M-145D Mobile Artillery Assault Platform (MAAP), commonly known as the Rhino, is a UNSC artillery tank. Using a prototype plasma cannon, it represented the first successful attempt by the UNSC to introduce a reverse-engineered technology from the Covenant Empire.[1]

In the Human-Covenant war the Rhino saw limited service but gave an excellent showing of itself during engagements with the Covenant. Information gathered from them used to further along other projects.[1] However, due to lack of resources for development of the original prototype line, there were not that many remaining by the end of the war.[2]

During the Battle of Arcadia in 2531, UNSC Pillar of Autumn was equipped with at least five Plasma Rhino prototypes for field-testing. Captain James Cutter of UNSC Spirit of Fire requested for and made use of the Rhinos to knock out a massive Covenant Energy Shield which defended an area of the planet's surface.[3] In the follow-up investigation of the area a pair of Rhinos were destroyed in a confrontation with an incomplete Super Scarab.[4]

As conditions have improved for looking at older prototypes, the UNSC has begun to look towards use of the Rhino again, which is supported by one of the top procurement officers in the UNSC, Isaac Richardson.[2]

The centerpiece of the Rhino is its experimental 320mm main cannon codenamed "Zeus." Based on technology recovered following the Liberation of Harvest, the cannon harnesses and directs plasma energy in a manner similar to other Plasma weaponry. However in order to fire its Zeus cannon efficiently, the Rhino must be engaged in lockdown mode, rendering the vehicle immobile. It is for this reason that the Rhino features an unorthodox orientation for its six tread tracks and is much wider than the Scorpion or even Grizzly tanks.[1]

The Rhino is meant to be a building destroyer, similar to the Destroyer class from Ensemble's previous game and the second to last of the Ensemble games altogether, Age of Mythology: The Titans. Its power is weaker than that of the Scorpion or the super powered Grizzly, but its base defense is stronger than the Scorpion's. A group of these tanks is powerful enough to take out other enemy heavy armor, but should be more of a fire support role alongside a large UNSC force, than a small group of these taking on a large Covenant army, but once fought into a Covenant base, a small group of these tanks could critically damage the Covenant's chances of winning, or could take the base out altogether (with the right amount of Infantry and Air Support supporting them). Its Y-button ability deploys it in a similar "lockdown" mode to that of the Cobra and Elephant, for a more powerful and longer range attack.

The Rhino is a unit exclusive to the campaign of Halo Wars, where it is used in a couple of missions: on the level Dome of Light for a specific purpose - to eliminate a Covenant energy shield, and on the level Scarab as a bonus unit. After that, the Rhino is not seen again. It is unusable in multiplayer, but besides its importance to the plot, otherwise plays similarly to the Cobra artillery in terms of speed, firepower, and even the sound effects of its deployed artillery cannon.

Rhino in campaign. The style seems to be the same as above.

A Rhino in lockdown mode, just before firing its main gun.

Different views of the Rhino. 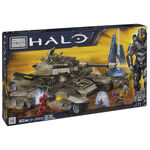 Retrieved from "https://halo.fandom.com/wiki/M-145D_Mobile_Artillery_Assault_Platform?oldid=1791937"
Community content is available under CC-BY-SA unless otherwise noted.