Were you looking for the M12B Warthog, featured in Halo 5: Guardians?

The M12 Force Application Vehicle, more commonly known as the Warthog, or simply the Hog, was a line of United Nations Space Command light ground vehicles.[1][4]

The first set of Warthogs were produced in 2319 in prototype form. These vehicles were known known as the "Z-12". These prototype vehicles quickly established themselves through a well crafted advertising campaign that showcased the vehicle in the outlands of Luna and Mars.[5]

By 2558, the UNSC forces working with the Swords of Sanghelios developed new Warthog variants using their technology. One was called the "Vespin Rocket Warthog", an M12R1 that had been upgraded with technologies from Sanghelios' past.[7] Another variant was the "Sword Needler Warthog", an M12 LRV upgraded with shields and a minigun that fired Subanese crystals.[8]

The M12 FAV Warthog is the UNSC's primary ground vehicle, used for its scouting and reconnaissance capacity, or as an integral part of a mechanized infantry unit; the M12 has been a part of the UNSC's armored vehicle fleet for two centuries,[5] and is the most recognizable vehicle in their arsenal. It is a highly mobile, all-wheel-drive, all-wheel-steering, ICE-powered (Internal combustion engine) vehicle equipped with a continuously-variable transmission.[4]

The M12 is a four-wheel all-terrain vehicle capable of going over any obstacle without much difficulty; under the hood is a forward-housed low-profile liquid-cooled hydrogen-injected ICE I/C plant, coupled with an infinitely variable transmission (IVT). According to a marine's quote, it has a 36-inch ground clearance, however if you look at it ingame, it appears to be only about a foot tall. However, it could mean that with the massive expansion size, as when in mid-air, the suspension extends to 36-inches. The hydrogen fuel is burned at very high temperature with a synthetic carbon/silicon catalyst to achieve even better fuel consumption. This hydrogen engine is the standard among all UNSC ground based vehicles, having replaced the use of fossil fuel-based engines some 400 years ago.

The M12 features a Graf/Hauptman Solar/Saline Actuator, and will convert up to twelve liters of fresh, brackish or salt water into hydrogen on the fly, detritus is compacted on board, this allows the Warthog to travel 790 kilometers or 490 miles before it needs to be refueled. Inexperienced drivers can find the M12 to be a huge and unwieldy vehicle, but it is actually very fast and highly maneuverable in the hands of a skilled driver. With proper application of the hand, or "e-brake" the M12 can actually turn on a dime. Massive disc brakes and its automatic braking systems allow the vehicle to come to a near immediate, but controlled, stop, should the driver be ejected or choose to leave the vehicle. The Warthog's tires have moved away from previous inert-gas pocket inflation with equally burst-proof single unit nanotube skeletons. They provide the buoyancy and ride of gas-pocket tires, but are nigh-indestructible. The relatively massive tires are a joint project between Michelin-Vance and AMG.[9]

The M12's design places it into the jeep family of vehicles; it has no doors and has a total seating of two or three. The M12's description as a reconnaissance vehicle is, at best, an understatement; the M12 has both offensive and defensive capabilities. The M12 can be configured to become a troop carrier, armament carrier, ambulance, reconnaissance vehicle, or communications vehicle. All M12-based vehicles are designed to travel both on and off-road, in all weather conditions.[4]

The M12 is the workhorse of light infantry ground vehicles; it is adaptable to almost any situation, maneuverable, and is arguably the most customizable vehicle with the most variants in the military's fleet, similar to the older jeeps used in the 20th century. It is able to reach top speeds of 125 km/h (78 MPH) and, more importantly, swings around rapidly to allow the gunner a better angle on a prospective target. The mounted M41 chain gun can cut down heavily armored infantry within seconds, this also applies to shielded infantry as well. With enough controlled fire from the 12.7X99mm armor-piercing rounds, the M41 can easily rip through the armor of a Covenant Ghost and destroy it. The Warthog's titanium armor, though light, is tough enough to take at least one fragmentation grenade and keep rolling and can withstand small amounts of energy weapon fire. It also makes for an impervious recon and transportation vehicle, able to make a smooth getaway or rapid infiltration if necessary. It can run on pure water, or urine if necessary, allowing it to be deployed in many different environments, while maintaining the vehicle's fuel is less of an issue.[10]

Due in part to its speed, the M12 is prone to roll over. It is vital that the driver can get in and out of dangerous situations without flipping the hard-to-right vehicle. The open nature of the Warthog always puts its driver and passengers at risk as a good marksman can easily take down the driver or passengers of the M12. A well thrown frag grenade can flip a Warthog, which will knock the driver and passenger out of the vehicle. Although the armor of the M12 is tough, a couple of direct hits from grenades or a well placed rocket will destroy it immediately. Covenant energy weapons are the biggest threat to the Warthog; a short burst from a Banshee's light plasma cannons is deadly, able to melt and punch through the armor with ease. The Warthog is also vulnerable to the Banshee's Fuel Rod Gun which can reduce the vehicle to twisted charred metal with one strike. Infantry plasma weapons can inflict moderate damage, and, like all vehicles, is rendered temporarily inoperable by a hit from an overcharged Plasma Pistol. Therefore, it is essential that the driver take advantage of the Warthog's speed to avoid enemy fire.

The M12 Warthog can be configured for various roles including the M831 TT which eliminates the support weapon in favor of four side-facing passenger seats, the M864A with an enclosed passenger compartment and treads in place of wheels, the M914 RV equipped with a towing winch and a heavy duty motor and gear system, armament carrier, ambulance, or communications vehicle. All M12-based vehicles in service with the UNSC are designed to travel both on and off-road, in all weather conditions.

In Halo Wars, Warthogs are lightly armored, fast and nimble scout units. They are player's first unit and do not have any damage capability other than running things over. Along with infantry units, they can be used to collect discovered resource crates. A Warthog cost 150 resources to construct at the command center and a unit takes up one population.

Concept of the Warthog in Combat Evolved.

"Puma" wrote along the rim; a reference to the name given to the vehicle in Red vs Blue.

The Warthog's dashboard, as it appears in Halo: Reach.

A Spartan driving a Warthog in Halo Wars.

Snow Warthog with ice-crusted treads for use in the Halo 3 Legendary Map Pack, "Avalanche."

The three SPARTANs in Halo Wars riding a Warthog with a four barreled LAAG.

The Warthog as it appears in Halo 3, crewed by three Spartans.

Various incarnations of the Warthog. Halo: Reach version seen to the bottom right.

Two variants of the Warthog for Halo: Reach, as seen in the Red vs Blue Bungie Day 2010 Video. 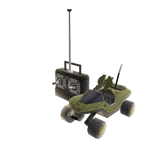 A real life model of the M12 Warthog.

A red megabloks transport variant of the Warthog.

An arctic version of the Halo: Combat Evolved Rocket Warthog.

The Forza Motorsport 4 render of the Halo 4 Warthog.

A formation of Warthogs leading an assault against Covenant forces during the Fall of Reach.

An uncolored render of the Halo 4 Warthog.

A rough model of the Warthog, used in background battles.