The M12 Light Reconnaissance Vehicle[3] (M12 LRV), commonly known as the Warthog, was a variant of the M12 Force Application Vehicle and the UNSC's most prolific anti-infantry vehicle. It is identical to the M12 FAV except that it features a mounted chaingun in the back.

M12 Warthogs were used during the Harvest Campaign.[6]

During the Battle of Mombasa, the UNSC deployed M12B LRVs.[7]

By 2558, the Liang-Dortmund Corporation had acquired M12 LRVs for defense against pirate Kig-Yars and Insurrectionists.[8]

Ammunition for these guns vary. In the case of some ONI LRVs, these guns will be loaded with high explosive dual purpose rounds.[9] The Swords of Sanghelios also managed to get an M343A2 to fire Subanese crystals and place it on an M12 LRV.[4]

Warthog LRVs can be equipped with any number of colors, camos, designs and logos.

From Halo: Combat Evolved to Halo 2[]

From Halo 2: Anniversary to Halo 5: Guardians[]

In Halo Wars 2, the M12 LRV is a buildable unit in the UNSC Garage. As well, infected M12 LRVs will sometimes be used by the Flood in the Awakening the Nightmare campaign and in Terminus Firefight. 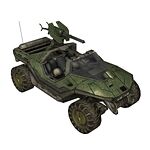 The Snow Warthog with ice-crusted treads for use in the Halo 3 Legendary map pack, "Avalanche."

Side view from Halo: Combat Evolved

The Older Mega Bloks set of the Warthog.

Three SPARTANs in Halo Wars riding a Warthog with a four barreled LAAG.

Halo 4 M12 As It Appears In Forza Motorsport 4's Autovista

A Warthog in Halo 4.