The M168 has three vital components to it, the first is the explosives pack itself which can be attached to any surface by using an adhesive strip on the back of the pack. The second component is the charge, the charge itself is also an explosive pack, the only major difference is the front panel of the charge has an arming handle and a keypad. From here the detonation code and countdown timer can be set and authorized, once the code has been verified the charging handle can then be rotated to its "armed" position. Once in the armed position an arming signal is sent to the other explosives within range. The third component is the wireless card which will locate and connect to a terminal or heads up display and wait to receive the detonation signal.

The M168 excels at taking down large objects that may be preventing friendly infantry and armor from reaching an objective, or preventing the enemy from gaining access to an area. While the M168 is not designed for killing infantry the large blast radius of the device can servery wound, or kill anything within range and if the placement is just right it may used to cunningly kill the enemy by bringing large objects and debris on them.

The M168's main disadvantage is that is it not designed for combat and as such its use as an explosive to eliminate enemy infantry and armor is limited. The M168 must also be detonated by a keypad terminal or an authorized users Heads Up Display, without this authorization the final detonation signal cannot be sent to the M168. 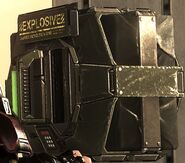 One of Mickey's M168s.
Add a photo to this gallery

Retrieved from "https://halo.fandom.com/wiki/M168_Demolition_Charge?oldid=930612"
Community content is available under CC-BY-SA unless otherwise noted.