The Elephant seems to serve a similar role to the Shadow of Halo 2, albeit much slower, sturdier, larger, more damage resistant, and less maneuverable.

The Elephant appears exclusively in the Halo 3 multiplayer map Sandtrap. There are two of them, located on both ends of the map. They are indestructible, and they are open-roofed since the Elephant was made as a service/repair station. There are turrets placed on the Elephant that can be taken off, and a stationary, stronger turret that's ideal for engaging an enemy Elephant. The vehicle has three levels, the first one with a data screen and a parked Mongoose. The second floor holds the breakable turrets and the cockpit. The third level is a small deck with the stationary turret placed on it. Should a player capture an Elephant, it will become a mobile spawning area. Taking over one of these giant vehicles can be tricky. If you try to come up behind the pilot, he/she could notice you in 3rd person view. It's a good idea to snipe the pilot from behind, or use a Banshee. To overwhelm the troops inside the Elephant, surround the vehicle with Warthogs or Choppers. To defend an Elephant, put some Warthogs in the first floor to drive out to engage incoming vehicles, and use Battle Rifles to snipe ground troops. It is also useful to have someone on board with a Spartan Laser or a Rocket launcher. In objective based games, the elephant also serves as a mobile bomb plant/spawn site and flag stand.

During the Battle of Draetheus V, several Elephants were used to evacuate wounded Marines.

It should be noted that Olifant is the Afrikaans and Dutch word for Elephant.

An Elephant being engaged on Sandtrap. 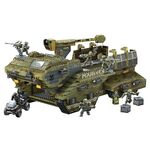 Retrieved from "https://halo.fandom.com/wiki/M312_Heavy_Recovery_Vehicle?oldid=1630244"
Community content is available under CC-BY-SA unless otherwise noted.