“The single-shot DMR fits somewhere between the sniper rifle and the battle rifle. It's deadly at range, but a quick trigger finger and careful aim assure that even at medium to short distances it packs a punch.”
— Game Informer[4]

The M392 Designated Marksman Rifle is an air-cooled, magazine-fed, gas-operated select-fire bullpup rifle that fires 7.62×51mm ammunition from a fifteen round detachable box magazine; the weapon's design aesthetics resembles those of the BR55. The weapon has a fire mode selector switch above its grip and a mounted optic with 3x magnification. The M392 has an ambidextrous magazine release button located directly above its magazine well just behind the trigger, as well as ambidex-friendly safety & firing mode controls - however it does not feature an ambidextrous ejection port, making use by left-handed shooters extremely difficult if not outright impossible (as hot shell casings would be ejected directly into a left-hand shooter's face). In-universe, the 7.62x51mm ammunition is interchangeable with ammunition from both the MA5 series of Assault rifles and the majority of the UNSC's light machine guns (such as the M739 SAW or the turret-mounted machine gun used by the Scorpion).

The M392 DMR's intended battlefield application is as a medium- to long-range weapon like the BR55 battle rifle. It is primarily issued to experienced operators with proficient skill in shot placement and "controlled firing," as the recoil and newly introduced reticle bloom from multiple shots can throw off the user's aim. The best strategy is to pause after each shot, then fire again as soon as the reticle contracts enough to cover roughly half of the target; simply fire as quickly as possible when using at extremely close range.

The DMR is an excellent sniping weapon. Landing headshots from vantage points is easy because its semi-automatic mode minimizes recoil. The DMR has the range of a Sniper Rifle and a higher accuracy and larger ammunition capacity than a Magnum (at the cost of reduced fire rate). The DMR kills a SPARTAN-III with full shields in four body shots and a headshot. The large size of Elites makes them easy pickings. The DMR is stealthier than the Sniper Rifle because the DMR leaves no trail of smoke.

The Designated Marksman Rifle is not without its drawbacks. Due to its semiautomatic fire rate, it is a substandard weapon in close quarters combat. Additionally, each magazine holds only 15 rounds, resulting in frequent reloads during which the user is vulnerable to attack. Finally, ammunition for the DMR is scarce, and the maximum carrying capacity is low at only four reserve magazines, making ammunition consumption a constant worry. A player can compensate for these disadvantages by carrying a close-in combat weapon (preferably with common ammunition), but will still need to watch their ammo meter carefully, especially if they favor long-range combat.

First person view of the DMR.

The DMR in the Halo: Reach Multiplayer Beta.

A SPARTAN wielding a DMR. 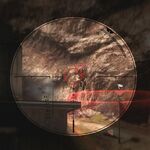 A first-person preview of the DMR.

The DMR, as seen in Halo: Reach.

A concept art piece of the DMR with designs from the BR55.

Concept art of the DMR derived from the BR55.

The DMR is Carter's preferred weapon.

An in-game profile render of the M392 DMR.

Another side profile of the M392 DMR

Another side profile of the DMR.